Conor Dillon says Government decision is ‘discriminating’ against him 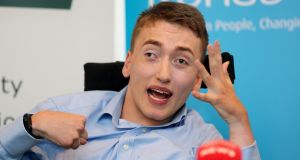 Conor Dillon, 21, from Dublin is calling for the reinstatement of the training allowance

For Conor Dillon, removing the training allowance for school leavers with disabilities will prevent him from “learning basic skills”.

The 21-year-old from Swords, Co Dublin, who has cerebral palsy, is due to start a new training course in the Central Remedial Clinic in Clontarf in September.

He said the HSE’s decision to axe the allowance will mean he will not be able to go on educational trips or engage with the community.

The HSE announced last month that from September 1st, school-leavers with a disability who take part in training programmes will no longer be entitled to the Rehabilitative Training allowance of €31.80 per week.

The allowance, which aims to support progression to further education or employment, will only be cut for new entrants to the scheme. It is primarily used to pay for food, travel, the extra costs of having a disability and socialising.

“I don’t think I should be discriminated against just because I’m starting a rehabilitation course,” he said. “Why do the rest of my friends on the course get the allowance and why not me? I think it’s totally wrong.”

Mr Dillon was speaking as part of a conference organised by six groups who were calling for the reversal of the cut; representatives from Aontas, the Central Remedial Clinic, Disability Federation of Ireland, Inclusion Ireland, the Irish Wheelchair Association and Rehab were also in attendance.

Joan Carty, National Advocacy Officer of the Irish Wheelchair Association, said the move is like “robbing Peter to pay Paul”.

“Without this modest allowance, many young people won’t be able to begin a rehabilitative training course. Often, they will be left with no other option than to stay at home,” Ms Carty said.

“It is unacceptable that, as thousands of their classmates and friends are preparing for third-level courses and apprenticeships, students with a disability are being denied access to training. It is clear that, without this allowance, young people with a disability will have a further barrier to equality placed before them,” she added.

Ms Carty said it is “very possible” that individuals in more rural areas will be disproportionately affected when compared with those in cities.

“Public transport is going to be much better in the cities. People in rural areas are very isolated in many cases anyway, so this is just going to impact more,” she said.

“Some people use the money for petrol, especially around rural areas where there isn’t any public transport. They may be lucky enough to have a car of their own but actually can’t afford the extra cost of fuel to be able to get in and out of the centres,” she added.

At the time the cut was announced, a HSE spokeswoman said it “will bring equity to all persons attending HSE-funded adult day services and will be in line with mainstream vocational training services”.