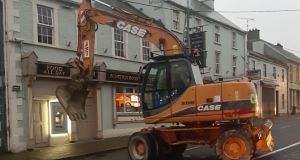 Gardaí have released without charge one of the men arrested in relation to an attempted ATM theft in Virginia last week.

The man (25) was arrested in Virginia following an intelligence-led operation which foiled an ATM robbery on the main street of the Co Cavan town in the early hours of Wednesday morning. Another suspect (61) was released without charge last Friday following his arrest during a follow-up search in Co Meath.

A third suspect is currently being treated in hospital under garda supervision. He will be detained on his release from hospital for continued questioning.

The men were detained under Section 50 of the Criminal Justice Act 2007 which allows suspects to be detained for up to seven days.

A fourth suspect, who escaped capture on the night of the attempted theft, is still at large despite a massive manhunt supported by the garda helicopter and local and national units.

The suspected thieves stole a digger from a local building site in the early hours of last Wednesday and drove it to the front of the Riverfront Hotel on Virginia’s main street.

Plain clothes and uniformed gardaí, including officers from the Emergency Response and National Surveillance Units, were lying in wait having received intelligence about a planned robbery in the area.

Armed officers moved in just as the men were about to use the digger to rip an ATM from the wall of the hotel, arresting one man. Another was found the next day hiding in the toilets of the hotel.

Another man was arrested during searches of the gang’s suspected base in Moynalty, Co. Meath where gardaí found €300,000 in cash which is suspected as being the proceeds of previous ATM thefts.

Case arose out of alleged incidents in the summer of 1969

Family secures €165,000 settlement from hospital over treatment of 92-year-old