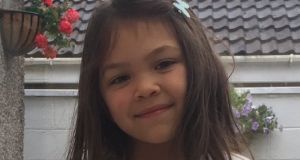 The funeral of Emmy Eckert (5) was told on Monday she was ‘so full of fun, joy and life’.

A pastor at a Baptist Church in Ballincollig, Co Cork has thanked the community for the support given to the family of a 5 year-old local girl who drowned on holiday in Germany.

The Bible Baptist Activity Centre was adorned in pink for the funeral service for Emmy Eckert who drowned in Dessau in Germany on August 8th.

Emmy was visiting a lake with her family when she briefly went missing. A search was carried out and she was found in the water.

Addressing mourners at the service on Monday, pastor Craig Ledbetter said the day was about celebrating the life of a cherished child.

He commended all those who loved Emmy for the kindness extended to the Eckert family in recent days.

“I thank all the folks at the Bible Baptist church. I thank you friends, co-workers, neighbours who have come. Thank you for the school honour guard. Thank you for showing such great kindness compassion and love for this family.”

A montage of photographs was shown during the service. It ended with a video of Emmy, who had completed junior infants, singing the “Atishoo” song with her siblings and them all laughing as they fell down.

The words: “Goodnight we will see you in the morning” were then displayed on screen.

Emmy is survived by her parents Andreas and Darlene and siblings Johannes, Paula and Josef. Her parents and siblings walked her white coffin down the aisle of the church after the service.

Emmy was a pupil of Scoil Mhuire in Ballincollig. The funeral service took place at 11am followed by burial at St Oliver’s Cemetery in Cork.

A friend of the Eckert family set up a GoFundMe page to help with the funeral costs. The page has raised over €10,000.

Separately, a Go Fund Me page set up to pay for the medical costs and the transportation of the body of a 3 year-old Irish boy who drowned in Spain has raised close to €16,000.

Avery Greene died on August 13th after getting in to difficulty in a pool in the Cabo Roig area of Costa Blanca.

The boy, who is the youngest in a family of three from Mallow, Co Cork, was discovered unconscious in the swimming pool by an early morning bather after he managed to briefly slip away from his family.

Funds raised will go towards helping to alleviate the financial burden of medical costs involved, as well as facilitating the final journey home for Avery and his family.

Funeral arrangements have as yet to be finalised. Avery is survived by his parents Eric and Amanda and his siblings Lucia and Robyn.

The death is being treated as a tragic accident. The Department of Foreign Affairs is providing consular support to the family.