Level of migrant participation in public life and politics not representative, says Minister 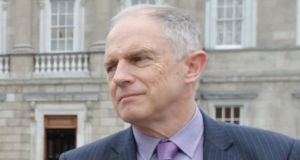 The level of migrant participation in public life and politics in the State “is nowhere near as representative as it should be”, a junior minister has said.

David Stanton, Minister of State for Equality, Immigration and Integration said Ireland “must develop a greater focus on diversity in politics”.

Around 100 migrant community leaders from across the country came together at the Department of Justice on Saturday to promote participation in politics ahead of the local elections in 2019.

The event heard there are currently 949 local councillors in the State and just three of those are non-Irish.

“According to the 2016 census figures roughly 12 per cent of the population is of non-Irish background, yet one only needs to look around the Oireachtas chambers in the Dáil and the Seanad or local councils in Ireland to realise that the level of migrant participation in public life and politics in this state is nowhere near as representative as it should be,” Mr Stanton said.

“Increased diversity brings with it both challenges and responsibilities. To ensure that we can fully realise the benefits of diversity in society, we must develop a greater focus on diversity in politics.”

Tian Yu Lloyd (35), from Hangzhou in China, is considering running as a candidate for the 2019 local elections.

Ms Lloyd, who is a member of the Social Democrats, came to Ireland in 2002 as a language student.

“I hadn’t planned to stay here longer than a year but I grew fond of Ireland and I stayed,” she said. Ms Lloyd met her husband years later while studying retail and business management at DIT and the couple now have a daughter together.

“It was only around the last general election I started to learn that it was possible to raise issues affecting the Chinese community here to the politicians,” she said.

“I started seeking knowledge of how the system works and began writing to candidates in my area. One of the Social Democrats candidates, Cian O’Callaghan, was very supportive and this was the first time I really began to engage with political parties. I tried canvassing and saw how communication between the parties and ordinary people work.”

Ms Lloyd said the main problem was that many migrants did not understand how the Irish political system works.

“Some people might have a good understanding, but we haven’t found an effective way of spreading the knowledge to the wider public.

“There is a will among migrants to become more engaged and there is a will from politicians too. The gap now I feel is the actual knowledge of how the system works.”

Brian Killoran, chief executive of the Immigrant Council of Ireland, said his organisation had been working on encouraging migrant participation in politics for a number of years.

“We’ve also been encouraging the major political parties and institutions in Ireland to recognise the fact that people from a migrant background are here, they’re voters, they’re part of Irish society and they should also be reflected in the politics of Ireland as well.

“Migrants don’t feel reflected in the composition of the current political system. Especially for younger people from a migrant background coming up, it’s important that they see themselves reflected in those institutions.”