‘The AG is correct to describe the Bill as a complete dog’s dinner. The reason it’s a dog’s dinner is because the chef is Shane Ross’ 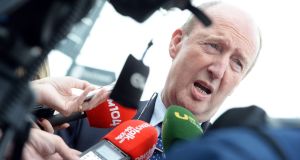 Fianna Fáil is putting pressure on the Government to scrap the Bill championed by Minister for Transport Shane Ross to reform the way judges are appointed.

Party leader Micheál Martin said in a tweet today that it was difficult to see how the Government could allow the Judicial Appointments Commission Bill to proceed if the Attorney General Séamus Woulfe “believes it to be unconstitutional”.

His comment came after Mr Woulfe said on Friday the Bill had become a “complete dog’s dinner”.

Mr Woulfe said it would be a “challenge” to ensure the Bill proceeds through the Oireachtas because it has been subject to so many amendments from the Opposition.

Speaking at a lunch hosted by the Association of European Journalists in Dublin on Friday, Mr Woulfe said the Bill had become mired in difficulties.

However, a Government spokesman subsequently insisted the Government was “fully committed” to the Bill, which he described as “an important piece of reform and modernisation”.

“The Government is fully committed to the Judicial Appointments Bill and will bring it back into the Dáil for Report Stage after the Easter Recess...The Government hopes that all parties will work together to assist its passage.’

Mr Ross is demanding that the Bill, one of his priorities in Government, be progressed soon, although it is viewed as unnecessary by most in Fine Gael.

Difficult to see how Government can allow Judicial Appointments Bill to proceed if Attorney General believes it to be unconstitutional.

The Bill has also been opposed by Fianna Fáil and others in the Dáil, although Sinn Féin has broadly backed the thrust of the Bill.

Fianna Fáil’s spokesman on justice Jim O’Callaghan today called on Mr Flanagan to scrap the Bill in light of the Attorney General’s comments.

“The Attorney General is correct in describing the Government’s Bill as a complete dog’s dinner. The reason it is a dog’s dinner is because the chef is Shane Ross,” Mr O’Callaghan said.

“The Government’s Bill is deeply flawed and will not achieve any genuine reform. In fact, its sole purpose is to appease one Cabinet Minister.”

Mr O’Callaghan said the comments by the Attorney General should act as a “wake-up call” for the Government, especially the remarks around the constitutionality of the legislation.

“Minister Flanagan needs to act on the concerns of the AG and scrap this legislation that has become a vanity project for one member of cabinet,” he added.

“It is not acceptable for a Government to sit back and allow flawed legislation to be introduced in a bid to keep Minister Ross on board.

“The European Commission has already stated that the Bill does not conform to European standards, which specify that a substantial part of the members of the judicial appointments body should be judges.

“At no stage has the Government ever explained the public policy reason for reducing judicial involvement in the proposed board and replacing this expertise with people who have no knowledge of which candidates are suitable, or characteristics required, for judicial appointment.

Mr Ross met Mr Flanagan on the issue this week, following the Independent Alliance Minister’s latest warning that he would not stand over the appointment of more judges under the current system.

The warning came at the same Cabinet meeting where the Government appointed three new judges.

It was initially intended the Attorney General would sit on the new Judicial Appointments Commission proposed by Mr Ross, but this was changed by the Opposition at committee stage.

Meanwhile, Labour’s justice spokesman Séan Sherlock said the Attorney General’s comments show that the “pet project” of Mr Ross was now a “shamble” which should either be scrapped or redrafted.

“The personal crusade by Minister Shane Ross to reform the appointment of judges is clearly now a shambles, when the legal advisor to the government Ross is a member of, describes it as a dogs dinner.

“If the bill is now in the dog house, it is incumbent on Minister Shane Ross to tell us how his pet project will be rescued.”