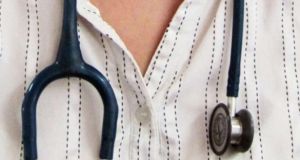 “GPs are already at maximum capacity, with burnout being a major issue amongst our members,” according to the National Association of General Practitioners (NAGP). File photograph: Hugh Macknight/PA Wire

General practitioners have rejected proposals by the Government that would see the reversal of financial cuts imposed following the economic crash in return for improving services and contract reforms.

In a statement issued at its annual conference in Cork on Saturday, the National Association of General Practitioners (NAGP) said it was resolute that the abolition of cuts imposed under financial emergency legislation - known as Fempi - should take place immediately and should not be linked to doctors taking on additional work.

“GPs are already at maximum capacity, with burnout being a major issue amongst our members. Our young GPs are voting with their feet and emigrating while our more seasoned GPs are retiring earlier than planned.”

The NAGP warned that linking the reversal of Fempi to new conditions of service was not open for negotiation.

In an address to the NAGP conference late on Friday night, the Minister of State at the Department of Health Jim Daly said: “Consultations with GPs aimed at putting in place a new multi-annual approach to fees, commencing in 2019, in return for service improvement and contractual reform and in line with Government priorities for the health service will begin in a number of weeks.”

The introduction of a new contract for GPs is one of the key elements underpinning the Government’s overall healthcare reform programme.

The new president of the NAGP Dr Maitiu O’Tuathail told the conference on Saturday that the Government could not continue to treat general practice as it had done in the past by imposing additional work without consultation and making changes without discussions.

“I believe 2018 has to be the year for general practice in Ireland. I don’t see any alternative. If the Government doesn’t act and doesn’t provide us with a new contract then our good will will run out.

“They have stood idly by while the speciality that we love has been brought to its knees under their stewardship. Action must be taken before all that is good about general practice is lost.”

Dr O’Tuathail said the Fempi cuts had to be reversed and GPs had to be resourced for the work that they were currently doing. He said the amount of voluntary work being carried out was astounding.

“Finally we need breaks. The locum system in Ireland is broken.We need a State-funded solution to fix it,” he said.

1 Murdered and mutilated: Keane Mulready-Woods and the teenagers of gangland
2 Cork student fatally stabbed in the neck at house party named
3 Who was murdered teenager Keane Mulready-Woods?
4 Thousands of teachers to strike on February 4th
5 Leaving Cert marks are altered as part of ‘unwritten policy’, claim examiners
Real news has value SUBSCRIBE