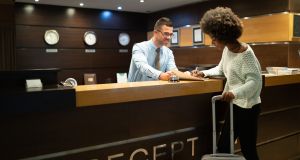 IHF’s outgoing president Michael Lennon says ‘legal costs were now so high they were having ‘hugely detrimental impact on the proper administration of justice’. Photograph: iStock

The legal profession must adopt a more reasonable approach to personal injury cases as excessive insurance premiums are seeing a significant number of hotels paying over €1,000 per room this year, the outgoing president of the Irish Hotel Federation has said.

Speaking at the IHF annual conference in Galway, Michael Lennon called on the legal profession to adopt a more reasonable approach to personal injury cases, saying it must shoulder some of the responsibility for the excessive cost of public liability insurance, which is threatening the viability of many businesses including some in the hotel sector. He said legal costs were now so high they were having “a hugely detrimental impact on the proper administration of justice”.

“The pace of insurance reform continues to be painfully slow. We welcome the establishment of the personal injuries guidelines committee and are hopeful that it will lead to more realistic awards for the future. However, in the meantime, excessive insurance premiums are continuing to hurt many businesses with a significant number of hotels this year paying over €1,000 per room. For an industry that is so price-sensitive, this level of cost is completely unsustainable.” The pace of reform must accelerate, he said.

General manager of Fitzgerald’s Woodlands House and Spa in Adare, Co Limerick, David Fitzgerald, told the conference about a compensation claim taken against the hotel. “A compensation claim was settled against us for €50,000, but I know the plaintiff only got €22,000 and it did not even go to court. The legal and administrative costs are things that I think are not being focused on enough”.

Mr Fitzgerald said he believes insurance companies, lawyers, assessors and a cohort of professional advisors “have a beneficial interesting in settling instead of contesting”.

Mr Fitzgerald made headlines last year when he publicly berated his insurance company for settling a claim which he said should have been defended.

On another occasion he was able to successfully defend a claim but his side had to cover their own costs. “The claimants walked away having had a pop at me because they had nothing to lose and we are wide open. We welcome people in to our hotel, anyone can have a pop, nothing happens to them if they are not successful”, he said. “We need to challenge more”.

Michael Magnier of the Vienna Woods Hotel in Dunkettle, Cork, has no uncertainty over who to blame. When a claim is made against a hotel, the legal process involves lawyers and a plethora of advisors, assessors and engineers, all of whom need to be paid in what amounts to a separate industry, driving up the costs of insurance, he said. He said he too was aware of many situations where the plaintiff did not receive as much as half of the value of the award. “In one case I know of a person was awarded €70,000 and received about €22,000. “My insurance bill is €156,000 per year. If it was €56,000 imagine what I could do with €100,000. Not for me personally, but to invest in capital expenditure, refurbishment or to simply reduce prices.”

Mr Magnier who is chairman of the IHF’s insurance committee said the association’s 1,000 members could provide many tales of injustice. But he said “the worst” can be when a claim is made by a member of staff and that person is out of work drawing social welfare. “We have nothing against a genuine claim but when social welfare is claimed, the Department of Social Welfare comes back to us and says we have to reimburse it. So we have to pay this to the government , even though we pay full employer’s PRSI and of course we have to pay the award through our insurance.”

The cost of the red dot on the hotel TV

“You know the red dot on your hotel room TV screen, well that costs €1 per week in energy costs. That is €52 per year. In a hotel like this one (in the Galmont Hotel in the city) there are about 220 bedrooms. That is €11,440 per year. Just for keeping the red dot on.”

Michael Magnier of the Vienna Woods Hotel in Cork is explaining where the money goes when you pay, for example €150, for a typical Saturday night’s bed and breakfast in an Irish hotel.

Insurance costs would take another €18 per room per night, he says.

Commercial rates vary by local authority but a cost per occupied room at his hotel comes to an estimated €8 per night.

Overall, he says the “unseen costs” of a hotel room come to about €60 per night. “I would love to be making the €90 profit after the €60 is taken out of the €150, but in fact the money is probably supporting other cost centres in the business”.

Other “unseen” cost centres would include gardens, car parks and maintenance, fire regulation compliance and lift safety certification, he said.

“And in reality you don’t get €150 every night. In fact at the low season earlier this year we were selling rooms at €89” .