Fundraiser to assist family of girl (16) killed in Cork crash has raised €17,000 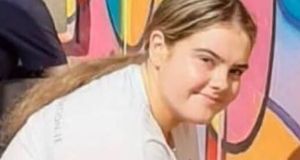 The funeral of Kimberly O’Connor, a transition year student at Terence MacSwiney Community College, Hollyhill, will take place on Wednesday.

A fundraising page set up to assist the family of a 16-year-old girl who died in a crash on the northside of Cork city last Wednesday night has raised more than €17,000.

Kimberly O’Connor, a transition year student at Terence MacSwiney Community College, Hollyhill, had recently returned from doing voluntary worker in India, was a passenger in a car that hit a wall at Harbour View Road in Knocknaheeny at 11.45pm. She was pronounced dead at the scene.

Three teenage boys were injured in the crash. The driver of the car, who is understood to be sixteen, fled the scene on foot but later presented himself at the Mercy University Hospital. He is still being treated for head injuries.

Two teenage boys who were backseat passengers in the car were taken to Cork University Hospital. One of the boys, who is 18, remains in a critical condition.

A local man has set up a Go Fund Me page to help support the relatives of the dead girl with funeral costs.

In a statement the principal Phil O’Flynn said she was shocked and upset at the death of the young girl whom she described as one of their “leading lights.”

She had been in Kolkata in January to work with the Hope Foundation and participate in the Hope You Can Paint Project painting local orphanages.

Gardaí have appealed to a taxi driver who may have information to contact them. They believe the taxi driver was travelling on Harbour View Road between 1130pm and midnight on the night of the crash and may have seen the incident

Gardaí are also appealing to any road users with dashcam footage who were travelling on Harbour View Road between 11pm and 12.30am on February 19th and 20th, to contact Gurranabraher Garda Station on 021 494 6200, the Garda Confidential Line on 1800 666 111 or any Garda Station.

The funeral of the transition year student will take place on Wednesday.

She is survived by her mother Jennifer and her siblings Shannon, Britney and Cody. Her father Mark died several years ago.