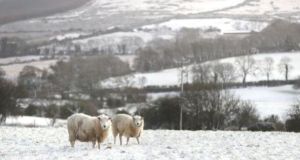 A nationwide snow and ice warning came into force at 6am with Met Éireann saying wintry showers will become increasingly widespread during today.

The status yellow warning, the lowest of the three warning categories, will remain in place until 9am on Wednesday.

Icy road conditions have been reported in Co Donegal this morning.

There is also a status yellow wind warning in place for Kerry and Clare between 2pm and midnight on Tuesday.

With flooding many parts of the country Met Éireann said forecast model suggests rainfall will be between 125 and 250 per cent above normal this week though that may be revised downwards by.

Ms Gavin said “it will be definitely colder than of late, but it will be a showery regime. It is not going to improve things drastically, but there are some opportunities for it (river levels) to recover a little bit.”

“At the moment there is a lot of low pressure around next weekend. We are not out of the woods with the risk of more rain coming. The next few days are more showery so rainfall levels won’t be what they are like last week, but showers can top up the flooding,” she said.

Tuesday will be very cold and windy, with sunny spells and scattered showers. Some of the showers may be of hail and sleet, with a risk of some snow showers, mainly over high ground. Tuesday will be another cold night. “The air moving into the northwest is much colder,” explained Ms Gavin. “There are showers in it and some will turn wintery into tomorrow. It is quite an unstable flow.”

There could be treacherous road conditions during Tuesday into Tuesday night.

On Wednesday, there will be scattered showers mainly over high ground.

There is a possibility of heavy rain on Thursday night and it will remain cold.

Current indications suggest that it will remain very cold and unsettled for the end of the week and the weekend, with a risk of further wintry precipitation and with a risk of frost at night. There will be dry, bright intervals also.