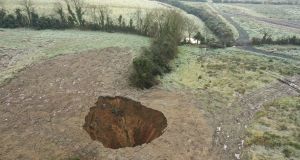 An aerial view of the latest sinkhole on Gyproc property in Co Monaghan. Photograph: Pat Byrne.

A large hole has re-emerged on lands attached to an old mining company in Co Monaghan.

The latest subsidence is understood to be the same crown hole that occurred on the field in August 2019.

Sinkholes occur naturally in limestone areas while crown holes, which look the same, are the result of subterranean human activity, including mining.

Gyproc mining company, which operates in the area, said the hole is the same crown hole that appeared previously and it has occurred because the material that was used to backfill the original hole has now settled and subsided.

The subsidence, which is approximately 350 metres from the nearest building, was noticed during a routine inspection of the site on Saturday evening.

The company said the hole is located within Gyproc-owned lands, adding that it is not close to any private homes, public infrastructure or bordering roads.

“Gyproc is confident it poses no risk to the public. In keeping with best practice, we have notified all relevant governmental and county council authorities,” a statement said.

“ We will continue to monitor and survey the area and provide updated information from surveys in the coming days to the relevant authorities and to keep people informed.”

The new hole is said to be cone-shaped, but slightly smaller in size than the one that appeared during the summer. An official survey of the hole is due to take place on Tuesday.

This hole is one of three separate holes that have appeared on land in the area over the past year-and-a-half.

The location of the subsidence is two to three fields away from where a sinkhole appeared at Magheracloone Mitchells GAA club in September, 2018.

It is a continued source of concern for locals, some of whom were required to leave their homes following the incident in September 2018.

An area between Carrickmacross in Co Monaghan and Kingscourt in Co Cavan has been mined for gypsum since the early 20th century.

Gyproc has repeatedly apologised for the disruption caused by the land collapse at the local community centre and GAA pitch, and the closure of the L4900 linking the village to the main R179 Carrickmacross-Kingscourt road.