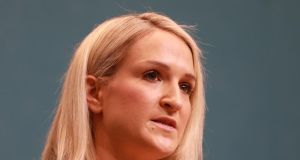 Helen McEntee from Nobber is seen as a reserved but smart politician who has performed well on the international Brexit stage. Photograph: Nick Bradshaw

The three sitting TDs in Meath East have the constituency nicely divided between them based on geographical location.

Minister for Social Protection Regina Doherty, a competent, straight-talking TD who never shies away from a debate, is based in Ratoath and covers the south of the county including the constituency’s largest town, Ashbourne.

Fianna Fáil TD Thomas Byrne overlaps with her in Ashbourne, where he too has a constituency office. Based in Colpe, further north, he covers the middle of the constituency.

He and Minister of State for European Affairs Helen McEntee overlap in Kells, where both have offices. McEntee from Nobber is seen as a reserved but smart politician who has performed well on the international Brexit stage.

But the political tsumani showing through in poll ratings for Sinn Féin could have a major effect on outcomes and party councillor Darren O’Rourke, competing for votes with Doherty, could be the beneficiary to her cost.

Before opinion polls showed a consistent rise in Sinn Féin ratings, O’Rourke, a member of the party’s ard comhairle, or national executive had not been seen as having enough sway to challenge for a seat despite consistently high poll ratings.

He came fourth in the 2016 election and this time around in the highly competitive commuter belt zone and with a volatile electorate he could potentially take the Minister’s seat.

As an indication of the pressure Fine Gael is feeling, in the final week before the election, a constituency row broke out between McEntee and Doherty over breaches of boundary divisions with leaflets and posters.

Meath East is a commuter belt constituency and might seem to be a place ripe for the Green Party. But as part of the Royal County it is also an agricultural constituency with rich farmland and an ambivalent attitude to the green movement.

Public transport is a major issue of concern for the thousands of commuters from the constituency’s dormer towns and childcare is a major bone of contention for many commuters who have to bring their children into town with them because of difficulties in accessing local creches.

Green Party candidate Seán McCabe, a scientist and as yet little-known contestant, cannot compete with the political fire power of the heavy-hitting sitting TDs.

One of Meath County Council’s most high-profile operators is former Fianna Fáil member and now Independent councillor Sharon Keogan, who last year became the first woman to win a council seat in two electoral areas – Ashbourne and Bettystown/Laytown, and has been talked about as a future TD.

Her Duleek office was petrol-bombed last month and she has said it is because she has spoken out against drug dealing in the area. In recent days she became embroiled in controversy about a Facebook post from last summer asking if children with special needs and poor ability to communicate should be microchipped with GPS.

Byrne topped the poll and was elected on the first count in 2016. His running mate is Ratoath-based councillor Deirdre Geraghty-Smith, who covers the urban areas of Dunboyne and Dunshaughlin.

Meath East has the remains of a Labour Party base, having most recently held a seat through Dominic Hannigan from 2011 to 2016.

The party recently selected as its candidate former president of the Union of Students in Ireland Cllr Annie Hoey, who the party has high hopes for down the line.

The three incumbents had looked safe. That could very likely change.