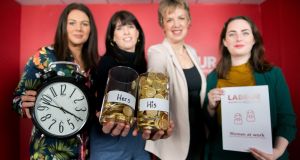 The party said on Monday that it would release details of the scheme in the coming days, but revealed that a pilot scheme would cost about €60 million and include 6,000 children in its care.

Ms Moynihan was launching the party’s proposals on gender equality in the workplace, along with director of elections Senator Ivana Bacik, in Dublin on Monday.

Labour pledged to introduce legislation to force companies with more than 50 employees to reveal any pay gap between men and women in their organisations.

The party also said that it would legislate to require listed companies to ensure women comprised 30 per cent of their boards, and sports governing bodies to have 40 per cent.

The party said that it would “introduce a legal right to flexible working hours where an employer only has to make a reasonable adjustment to allow for them”.

“The designated parent does not necessarily need to be there from 9 o’clock to 5 o’clock,” Ms Moynihan said.

She said that childcare was being raised constantly by voters on the doorsteps.

Ms Moynihan said that the party would publish “full costings” for its proposed national childcare scheme in the coming days.