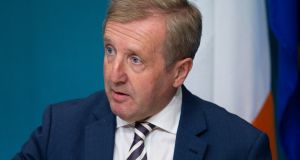 Michael Creed hopes to bring home a running mate in this constituency which is a mixture of satellite commuter towns in the south and more traditional country market towns in the north. Photograph: Tom Honan

Cork North-West may have shed its image as one of the country’s most conservative constituencies in recent referendums but the general election promises a return to tradition, with Fine Gael taking on Fianna Fáil.

The Social Democrats, the Greens and Aontú are all fielding candidates but this essentially is going to be an old-style dust-up between the two main parties, with Fianna Fáil currently holding the upper hand.

In that sense, Cork North-West is a pivotal constituency – win two seats here and you not only gain two seats, you stop the opposition making a gain – the equivalent of a six-pointer in a relegation play-off.

The constituency itself is a mixture of satellite commuter towns such as Ballincollig and to a lesser extent, Macroom in the south and more traditional country market towns like Kanturk, Charleville and Newmarket in the north.

And that north-south divide has always been a notable feature of elections in Cork North-West, with the more populous south usually returning two TDs to one from the more rural and agricultural north.

Fine Gael has selected former Independent member of Cork County Council John Paul O’Shea from Lombardstown in the northern half in the hope of capturing a second seat – effectively taking out Michael Moynihan.

O’Shea ran as an Independent in 2016, garnering 10.25 per cent of first preferences and then picking up sufficient transfers to outlast sitting Fine Gael TD Áine Collins before ultimately losing out to Michael Moynihan by 249 votes.

Fine Gael saw O’Shea’s potential and recruited him in 2018 and their hope is that with a party machine behind him, he will capture the second seat with careful vote management with Creed, who is based in Macroom in the south.

Fianna Fáil has tended to allow its candidates adopt a free-for-all approach and it stood the party in good stead in 2016 when, although Aindrias Moynihan was 1,600 votes ahead, Michael Moynihan got a solid vote to take the third seat.

The battle for the third seat this time will be fought in the northern half of the constituency, with Michael Moynihan expected to do well west of Kanturk and O’Shea expected to poll better east of Kanturk near his Lombardstown base.

Given this predicted parity east and west of Kanturk, some strategists see Charleville as being the key to who comes out on top in this contest within a contest and both candidates are sure to focus on the town.

Fianna Fáil came out on top in the 2019 local elections in the Kanturk Electoral Area, which includes both Kanturk and Charleville, by almost 900 votes with Michael Moynihan’s brother, Bernard, topping the poll, more than 500 votes ahead of O’Shea.

Three weeks ago, many pundits were tipping O’Shea to come out on top in the northern end of the constituency over Michael Moynihan but with Fine Gael slipping in the polls – down to 20 per cent in The Irish Times/Ipsos MRBI poll – he may find himself drifting on an ebbing tide and Moynihan may just hang on.