Simon Harris claims party wants to introduce free dental care for those under 16, and a baby box for every newborn child 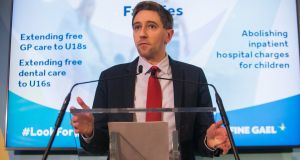 Fine Gael says it will abolish hospital charges for children in the next budget and will roll out free GP care to everyone under the age of 18 by 2025 if it is returned to government.

Minister for Health and outgoing Wicklow TD Simon Harris said the party also wanted to introduce free dental care for those under the age of 16, as well as a baby box for every newborn child.

Such boxes contain essential items needed by parents of newborns, and the box itself is designed to double up as the baby’s first crib. Finland has been providing baby boxes for decades, while Scotland introduced them in 2017.

Mr Harris made the announcement at a press conference with Minister for Communications Richard Bruton and Vicki Casserly, who is standing for Fine Gael in Dublin Mid-West.

He outlined the cost of the plans announced on Monday, which would be included in the Fine Gael manifesto, and said the move on free GP care for all under the age of 18 was part of the “next steps towards universal healthcare”.

His plan for extending free dental care has already drawn criticism from the Irish Dental Association, which said it would for the first time be using the general election campaign to highlight the “dental crisis”.

The chief executive of the association, Fintan Hourihan, said: “We have seen that the number of children under 16 who are eligible to be treated in the public service has increased by 20 per cent in recent years, while at the same time the number of dentists employed by the State has dropped by 30 per cent.”

He said the new plan was “unrealistic and unacceptable”, and was announced without any consultation with the association.

Mr Harris said it was still his intention to bring in free GP care for all as part of the Sláintecare reforms, but said the Fine Gael manifesto was outlining commitments for the next five years.

“We will also continue to look at increasing the thresholds for medical cards to ensure that particularly people whose wages increase don’t lose access to a medical card.”

Free GP care for the under-6s is already in place, and is expected to be rolled out to under-7s and under-8s this year, although fees have yet to be negotiated with GP representative groups.

Mr Harris said there were 650,000 children aged between 12 and 18, indicating that the cost of the proposals in the Fine Gael manifesto would be in the region of €80 million over five years, although fees would also have to be negotiated with representative groups.

Free dental care for those under 16 would cost €26 million per year, baby boxes would cost €10 million over five years, and the abolition of hospital charges would cost €15 million in a full year.

Both Mr Harris and Mr Bruton attacked the health proposals from Fianna Fáil, with Mr Harris saying the election was “very competitive” and insisted Fine Gael would challenge plans from its main rival since it was competing to form the next government.

He claimed that Fianna Fáil’s plan to increase spending on health by €2 billion over five years was not clear, saying the Government had increased health funding by €800 million to €1 billion per year.

The Wicklow TD also insisted he wanted to remain as Minister for Health if Fine Gael is returned to power after the election. “100 per cent, I love being Health Minister.”