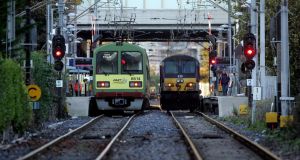 An initial review of Monday night’s closure of Lansdowne Road Dart station during the Republic of Ireland and Denmark soccer match at the nearby Aviva Stadium has shown there was some crowding and delays experienced by fans.

The organising group responsible for the closure said that “there will be some valuable learnings” captured through the trial closure which it said would be used to inform security and crowd control during next year’s Uefa Euro 2020 matches at the stadium.

However, regular users of Lansdowne Road Dart station, along with some members of Dublin City Council, have questioned the wisdom of closing a station which has the potential to take very large numbers of supporters right up to and away from the stadium.

“It is counterintuitive,” said Pádraig Shanahan, who lives on O’Connell Gardens in the shadow of the stadium.

“You would expect that Irish Rail would be increasing the frequency of trains passing the stadium. Dart is heavy rail. It being there is a godsend in moving people quickly in and out.

“The capacity of the stadium is 52,000 people, about equal to the Dart capacity per hour in both directions. To close Lansdowne Road station when it is most needed is hard to understand.”

Ballsbridge resident Malcolm Kennedy compared the initiative with crowd control at the Bray air show. “There was 80,000 people at the air show and when the roads clogged up, [the] Dart moved people out very efficiently,” he said.

Dublin city councillor Mannix Flynn described the closure of Lansdowne Road station as a “madness”. He said: “They’re using people as guinea pigs to see will they walk to different stations in preparation for Euro 2020.” He was also critical of the absence of express buses to get people in and out of the area.

Irish Rail said the decision to close Lansdowne Road station was taken by the Dublin Uefa Euro 2020 Local Organising Structure, which includes representatives of Dublin City Council, the Department of Transport, Tourism and Sport, the Football Association of Ireland and the Aviva Stadium, in conjunction with An Garda Síochána, the National Transport Authority, and Irish Rail.

A spokesman for Irish Rail said nearby Dart stops at Grand Canal Dock and Sandymount were quite close by international standards, and it was likely many soccer fans had walked to one of these. He said it was normal in Uefa matches to have a security and ticketing zone around the stadium into which only those with tickets would be allowed. Such a zone was larger than that which would normally apply at Lansdowne Road and took in the station, he said.

In a statement the organising group said: “The Dublin Uefa Euro 2020 Local Organising Structure has commenced its review of Operation Access with an initial multi-agency debrief after last night’s match, and will include all of its findings and recommendations in the evaluation over the coming weeks.”

The statement said 70 volunteers supported stewards “to assist and guide supporters along the walking routes from both Grand Canal Dock and Sandymount Dart stations.

“We noted a number of elements we will specifically address in our review and understand that some fans experienced some crowding and delays accessing the Aviva Stadium. We anticipated that there would be areas to address and improve as a result of the trial operation and we have received feedback from attendees, including conversation on social media, to ensure the voices of the fans and residents are reflected in our review.”

The statement concluded: “There will be some valuable learnings around the logistics, mobility, safety, security and stadium access captured through this operational exercise, which, in collaboration with Uefa, will inform our plans for the hosting of Uefa Euro 2020 matches next June.”