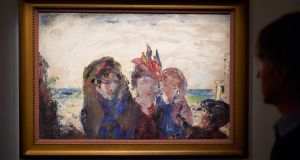 A Paris of the West by Jack B Yeats, on display at Sotheby’s in London as part of its Irish art sale. Photograph: Michael Bowles/Getty Images for Sotheby’s

A leading figure in the sport of road bowling has issued an 11th hour plea for a benefactor to help purchase an important painting of a bowl player which is due to go under the hammer at Sotheby’s in London on Tuesday.

“It’s a very interesting depiction of a bowl player from the 1940s and what’s interesting about it is that it shows part of the action, you would not normally see - the bowl player lining up his shot rather than actually throwing the bowl.

“Back in the 1980s, Murphy’s brewery, which sponsored bowl-playing events in Cork since the 1930s, teamed up with Ból Chumann to buy a famous painting by Daniel McDonald of ‘The Bowling Match at Castlemary’ near Cloyne.

“McDonald’s painting was from 1847 and showed the aristocracy out bowling whereas Gabriel Hayes’s painting is from the 1940s and depicts what looks like a working man out bowl-playing so it offers a contrast to McDonald’s work.”

Mr Ó Tuama said McDonald’s painting now hangs in the Crawford Municipal Art Gallery in Cork and it would be marvellous if some benefactor would buy the Hayes painting and similarly donate it to the Cork gallery.

According to Sotheby’s, Hayes’s oil painting, which is valued at between £30,000 and £50,000, is believed to have been painted around 1941 in Lough Gur in Co Limerick. The painting comes from the collection of former Formula 1 motorsport team boss Eddie Jordan.

Gabriel Hayes, who was taught by Sean Keating at the Metropolitan School of Art in Dublin, was married to UCC academic and archaeologist, Sean P O Riordain who led the excavations of Lough Gur between 1936 and 1954.

According to Sotheby’s, Hayes’s painting depicts the foreman of the excavation site, Jock Kiely preparing to loft a bowl while a local farmer, Lar Gorey watches on in anticipation of where the shot might land.

Sotheby’s say that the influences of Hayes’s mentor, Sean Keating, who painted the famous ‘Men of the South’, is “evident in the realist tradition of the present work and elevation of local men to a heroic status”.

No less than four paintings by Paul Henry are also going under the hammer at the Sotheby’s auction. These include ‘Clare Island from Achill’, which is emerging for sale for the first time in more than a century, and for the first time at auction. In oil on canvas, it carries an estimate of €90,500-€136,000.

It was acquired in a private sale by Geoffrey Thomas Taylour, 4th Marquess of Headfort and his wife, Rose, just over a century ago, and held privately by the family until now.

The painting previously caused some excitement in the media when it was bought by the celebrated American theatre actress, Katharine Connell in 1948.

In the painting, a boy peers up at three young women, silhouetted against a view of the sea on the Sligo coast. The title casts this unlikely character as Paris, the classical hero who was tasked with choosing who was the most beautiful of the goddesses, Hera, Venus and Athena.

According to Sotheby’s , in this work, Yeats elevates a west of Ireland subject to the realms of antique Greek and Roman mythology, and pays homage to the grand tradition of European painting.

Yeats is currently the subject of a landmark exhibition at the Irish Museum of Modern Art in Dublin, in which he is placed side-by-side with Lucian Freud for the first time in 70 years.