Where do Ireland’s asylum seekers come from?

Origin and number varies with world events and asylum seekers peaked at 11,634 in 2002

Campaigners deliver a letter signed by more than 4,000 people to Minister for Justice Charlie Flanagan, calling for a pathway to residency for undocumented children and young people in Ireland. 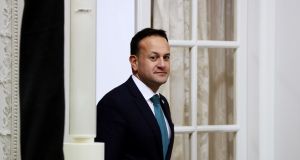 Taoiseach Leo Varadkar provoked criticism recently when he sought to account for a rise in asylum numbers by pointing the finger at Georgian and Albanian nationals carrying fake documents.

The tone was criticised as a dangerous framing of a complex asylum issue. The reality is that whether or not the numbers of certain nationalities have been spiking in recent times, it is just the latest pattern in a system regularly shifting in the context of both geopolitical and economic realities over 20 years.

Detailed statistical information can, when drawn together, offer a good view of how many people have come to Ireland and when – their reasons are easily speculated upon by virtue of source countries and time periods.

In its annual summaries, the International Protection Office (IPO, the Office of the Refugee Applications Commissioner or Orac until 2017) lists the top five or six source countries of those seeking refuge.

Despite misconceptions of mass arrivals from a small group of places, the IPO and Orac reports consistently point out that in fact small numbers of applications are received from a large number of countries.

Some stand out. Nigeria, Pakistan and Zimbabwe have, between 2001 and 2019, been the most common origin of asylum applicants. These are followed by the Democratic Republic of Congo (DRC), and Georgia and Albania, the joint fifth most common countries to appear in annual tallies.

China and Romania too have been relatively common.

In total, 24 countries have featured in the “top five or six” countries of origin in annual reports over 18 years. Many have been obvious conflict areas such as Iraq, Afghanistan, Syria and Sudan.

But patterns fluctuate. Towards the end of 1999, data showed a sixfold increase in Romanians throughout the year and a fourfold rise in Nigerian applications. The latter country had the highest number of applicants every year from 2001 to 2014 when it was surpassed by Pakistan, while Albania and Georgia have topped the rankings this year and last.

Even in 1999, the growing strain on the system was evident, as was the resulting delay in processing applications. Amid reports of about 1,000 people arriving every month (the actual average monthly rate of asylum applications that year was 644), Fianna Fáil TD Batt O’Keeffe called for an investigation, concerned that asylum seekers were not being processed in the other European countries they had come through – the first-country principle enshrined in EU law.

“There obviously has to be racketeering involved and, given the numbers coming into Rosslare, I think it’s a fair assumption that there must be some level of collusion with the racketeers by some officials in France and the UK,” Mr O’Keeffe said at the time.

Processing times and delays were a problem from the outset, aggravated by rising numbers of arrivals and a shortfall in the administrative ability to cope with them.

But the government had little idea of what was to come. In 2000, asylum application rates began to rise significantly, breaking the 10,000 mark for the first time, at 10,938. They would peak at 11,634 in 2002, the highest level on record before rates continued to decline – with a a 92 per cent reduction between then and 2013, in the depths of economic depression.

According to IPO data, annual processing rates ranged from 12,577 in 2001 to a low of 1,060 in 2014 (this data often varied between processing of applications filed in a specific year to overall applications). Between 2001 and 2019, average monthly totals of new applications were anywhere between 79 and 969.

Thousands of applications are also withdrawn, from an annual rate of less than 200 between 2012 and 2014 to as many as 8,641 in 2003. This refers not just to individuals who voluntarily withdraw from the process, but also those who do not co-operate with it, therefore having their applications “deemed to be withdrawn”.

Despite never even approaching early record years, applications have been increasing slowly since 2014. Last September they rose above 3,500. This resurgence coincides with an apparent increase in community opposition to direct provision centres being located in their areas.

The IPO’s annual reports list more than 31,500 appeals hearings for those refused asylum. Challenges to the system, and its outcomes, also stretch to the courts where there have been somewhere in the order of 1,578 judicial reviews lodged since 2001 (official data often includes a small number of legal actions other than judicial review).

In its first year of operation in 2001, the Office of the Refugee Applications Commissioner noted a “significant issue” in dealing with judicial reviews which applicants were seeking under section 5 of the Illegal Immigrants (Trafficking) Act 2000.

“Most judicial reviews are concerned with how the decision was made and not what was decided, and the focus is very much on whether the stated procedures are carried out, in accordance with law, and constitutional and natural justice,” it said.

Fingerprinting has long been a part of the system. Since 2007, Ireland began using an electronic comparison system known as Eurodac. All prints taken are transferred to a database in Luxembourg and match searches are usually sent back to countries processing claims within 10-15 minutes. This is done primarily to see if the applicant had previously arrived in another EU member state which would then have responsibility for processing their case.

Since 2007, more than 19,000 sets of fingerprints have been taken in Ireland and fed into the database.