Bloody Sunday 1920: The IRA ‘got the wrong man’ when they shot my uncle

‘For me as a lawyer, murder is murder. I can’t see how he could possibly be a spy’ 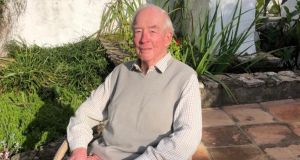 On the morning of November 21st, 1920, John J Fitzgerald, known in the family as Jack, was shot dead in his bed at a lodging house in Earlsfort Terrace. He had been shot at close range four times by the IRA squad sent to that address.

The day would become known as Bloody Sunday – describing a series of assassinations by the IRA that morning, and a mass shooting by Crown forces at Croke Park that afternoon.

At 22, Fitzgerald had lived an eventful life. He served in the first World War at the Somme and then with the Royal Flying Corps where he crashed his plane and was taken prisoner. He went on to command a squadron in the Russian Civil War fighting against the Bolsheviks.

Fitzgerald was from Cappaghwhite, Co Tipperary. His father Dr Joseph Fitzgerald was a dispensary doctor and they were part of that vanished tribe of Catholic loyalists that disappeared after independence.

When Jack returned to Ireland in 1920, he joined the Royal Irish Constabulary as a barrack defence officer in Co Clare where he was captured by the IRA, shot and left for dead. He was convalescing from his wounds in Dublin when the IRA killed him on Bloody Sunday.

His family maintain to this day that his killing was a mistake. This suspicion is bolstered by evidence given at the inquest that the IRA party at Earlsfort Terrace inquired after a Fitzpatrick, not a Fitzgerald.

Nobody claimed responsibility for Fitzgerald’s death, and diligent research by the anonymous author of the bloodysunday.co.uk website reveals that a Clement Patrick Fitzpatrick, employed as a temporary lieutenant in Dublin Castle and therefore possibly a spy, left Ireland five days after Bloody Sunday.

“I am a lawyer,” says Jack Fitzgerald’s nephew, Michael Fitzgerald. “For me as a lawyer, murder is murder. I can’t see how he could possibly be a spy. It is regarded in the family as a terrible error by the IRA. They got the wrong man.

“If my uncle had been a British officer, that would have been a reason to shoot him, but he wasn’t. The reason given afterwards is that he was a spy. I simply can’t accept that.”

Michael Fitzgerald says his uncle’s shooting had a profound impact on his family and most left Ireland a short time afterwards.

“Devastating is the appropriate word. All the boys left Ireland immediately for England or elsewhere. The girls also, except one girl who looked after the father who died shortly afterwards,” he said.

Now 84 and a retired Queens Counsel, Michael Fitzgerald says his father, Sir William Fitzgerald, the last British chief justice of Palestine before the foundation of the state of Israel, refused to return to Cappagh and only visited Ireland to receive an honorary degree from Trinity College.

“I said to him, he had to go over and collect it and he said that he would never go over to Ireland again. I managed to persuade him. It was the only row we ever had. That was the only time he ever went back to Ireland,” he remembers.

He acknowledges that the issue of his uncle being a combatant is “extremely delicate ground” and that his family has made its peace with Ireland. “I regard that as history now.” He decided in that spirit to give an interview for the Bloody Sunday 1920 documentary which was broadcast this week on RTÉ.

He is hopeful that the events of Bloody Sunday will be studied from all sides with a view to aiding reconciliation rather than opening old wounds.

“My very firm belief is that we should reconcile ourselves to all these things that happened in the past and learn from them. Please God nothing like that ever happens again.”

Bloody Sunday 1920 is on the RTÉ Player