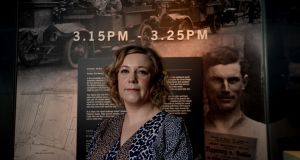 Michael Hogan is the most famous of the 32 people to die from the shootings on Bloody Sunday, 1920. Captain of the Tipperary team to play Dublin in football that day, he was shot as he lay on the ground halfway between the goalposts and the sideline in the corner of Hill 16 and the Cusack Stand. Tom Ryan, the man who said an act of contrition over him, was shot in the stomach and died later.

November 21st, 1920 began with a series of IRA assassinations of British intelligence officers around central Dublin. These were followed by a mass shooting by Crown forces at Croke Park that afternoon.

Every day that she works at the GAA museum in Dublin’s Croke Park, Julianne McKeigue is reminded of that day. The Hogan Stand, directly across from the GAA museum, is named after her grand-uncle.

She has worked there for the past 11 years and in 2020 has been co-ordinating educational events around the Bloody Sunday centenary – albeit from home now because of Covid-19.

An elaborate commemoration was planned. The focal point was to have been the second International Rules test between Ireland and Australia, which fell on the centenary of Bloody Sunday. That had to be abandoned, along with an exhibition to mark the centenary, which is now online.

McKeigue’s maternal grandmother, Kattie Hanley (née Hogan), was Michael Hogan’s sister. “Michael Hogan was always there in the background,” she says. “I did my history project in the Leaving Certificate on Bloody Sunday. Many people I work with did not know I was related to him until this year.

“It’s really only now that people are talking about it. I never knew my granny. She died before I was born. The family did not talk about it, but they always marked the anniversary. We are a big GAA family.

In other circumstances the Bloody Sunday centenary would also have seen a gathering of the Hogan family from around the world.

“I am conscious that even though the Hogan Stand was named after him, there were 13 other people who did not go home to their families. It is important that all the families are talked about and all their families are remembered.”

The exhibition contains a number of letters that were recently discovered by Louise Hogan, another grand-niece of Michael Hogan. In the Hogan family home outside Grangemockler in Co Tipperary, she found dozens of letters of sympathy and cards sent to the family following Michael Hogan’s death.

They convey the sense of shock and outrage that followed the Bloody Sunday shootings at Croke Park. “The emotion is not what you expect for the early part of the 20th century,” says McKeigue. “There is probably a thesis in them.”

There is further sadness in the family’s history. It relates to Dan Hogan, Michael’s older brother. An energetic IRA volunteer in Monaghan, he worked on the Great Northern Railways until losing his job as a result of his activities.

In January 1922, Dan Hogan raised the tricolour in Dublin Castle during the handover from British rule. He went on to become chief-of-staff of the Defence Forces between 1927 and 1929.

But in an extraordinary incident, Dan Hogan allegedly punched the then Minister for Defence Desmond FitzGerald in a row over army pay. He emigrated to the United States immediately afterwards. In 1941, Dan Hogan walked out of his apartment in Brooklyn and was never seen again.

The GAA Museum at Croke Park hopes to reopen its Bloody Sunday exhibition when current public health restrictions ease. Among the artefacts on display are the silver referee’s whistle used for the Tipperary v Dublin game on Bloody Sunday; the prayer book and silver cross carried by Thomas Ryan when he was shot; and the letters sent Michael Hogan’s family after his death. For more see crokepark.ie/bloodysunday

Seventeen Irish panto productions for all the family to watch this season
You Exist Too Much: A provocative and insightful debut