Many schoolbuses likely to operate without social distancing when schools reopen 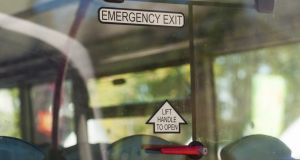 Many schoolbuses are likely to operate without social distancing when schools reopen. File photograph: iStock

Many schoolbuses are likely to operate without social distancing when schools reopen, despite new public health advice which states that secondary students should maintain a safe distance while on board such vehicles.

The National Public Health Emergency Team (NPHET) advised the Government earlier this week that secondary students should both maintain physical distancing and wear face coverings while on schoolbuses, in line with wider rules on public transport.

This was a change to earlier advice which stated that physical distancing was not required.

The updated advice says primary school students should physically distance “where possible” on buses, but do not need to wear face coverings.

In a statement on Thursday, the Department of Education said there will be a “rolling implementation” of these new guidelines to provide for physical distancing on secondary school bus services.

It is understood that hundreds of additional buses will now be needed to transport some 68,000 secondary students to school each day in compliance with the new guidelines .

A spokesman for the Department of Education said discussions were underway with Bus Éireann – which operates school transport services – so that any services that can operate from the start of the school year at 50 per cent capacity will do so.

In the meantime, he said a range of measures will be in place to ensure the safe operation of school transport services.

They include preassigned seating to ensure children sit beside siblings or classmates, additional hygiene and cleaning measures on board schoolbuses and the wearing of face coverings for children over the age of 13.

He said the department welcomed NPHET advice and arrangements for primary school transport schemes. These services will operate fully when schools reopen, with additional measures and hygiene requirements in place.

Secondary school services will also commence operation when schools reopen, with additional measures and hygiene requirements in place, and with the “rolling implementation of measures to provide physical distancing on the post-primary services as required”.

The spokesman said the Minister for Education will continue to work with other Government Ministers to identify and consider the additional resources required to support the rollout of these measures.

Bus Éireann said in a statement that it is implementing a range of measures to ensure the safe operation of its school transport service when schools reopen.

It said the Department of Education and Bus Éireann will continue to communicate with parents, guardians, contractors and drivers on the operation of services for the upcoming school year.

Meanwhile Siptu, one of the trade unions representing drivers at Bus Éireann, said it was told by the State transport company it could take up to eight weeks for proper protective screening to be erected around driver cabins on school buses.

Fran McDonnell, assistant industrial organiser with Siptu, said many drivers who are “fearful and anxious” for themselves and their families would be unhappy that the screens have not already been fitted throughout the school bus fleet.

“I raised this issue on June 18th and as of this month there is still no work done on the screens,” he said, following a meeting with Bus Éireann management on Wednesday.

“Management said head visors and face masks would be sufficient but we rejected those claims.

“I wouldn’t say this isn’t a red line issue for us any more. Members won’t be happy and the union is not happy with the timeline.”

Siptu was told Bus Éireann has committed to the immediate installation of rear screens but that “roller type screens” on the passenger side would take another six to eight weeks to be installed.

Social distancing for post-primary students will take “a number of weeks” to be implemented, Mr McDonnell was told.

“It will be full capacity until then, loading everyone back on to the same bus again,” he added.

Mr McDonnell said the commitments were brought to drivers at the “11th hour” when the Department of Education and Bus Éireann “should have been fully on top of the situation”.

Meanwhile, the Garda National Vetting Bureau said it is “ready, willing and confident” that it will be able to process the “expected increase in vetting applications” for any newly-hired school bus drivers as well as other schools staff at “short notice”.