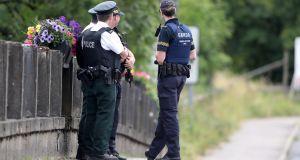 Members of the PSNI and the Gardai. File photograph

People suspected of being members of the “top tier” of the New IRA were detained during a cross-Border operation targeting the paramilitary organisation on Tuesday.

Seven men and two women, aged between 26 and 50, were arrested in Derry, Armagh and Tyrone. Security sources said a PSNI and MI5 investigation, supported by the Garda, had been ongoing for more than a year, with covert surveillance focusing on suspects.

“Some of these people are suspected as the top tier of the [New IRA] organisation and a huge amount of work has gone into the investigation for over a year,” one source said. “These are suspected as being at army council level – at the top and organising things.”

The New IRA is the largest dissident terrorist organisation on the island of Ireland and has been bolstered of late by defections from the Continuity IRA.

The arrests represent a significant step in the ongoing investigation into the group that murdered journalist Lyra McKee last year in Derry. The group is also suspected of conspiring to kill senior Sinn Féin figures.

Deputy First Minister Michelle O’Neill in February said police had advised her that the New IRA was planning a car bomb attack on a Sinn Féin member. This came after she and Sinn Féin MLA Gerry Kelly attended a PSNI recruitment event.

Garda teams backed by armed members searched properties in Dublin, Laois, Cork and Kerry early on Tuesday as part of Operation Arbacia, but no arrests were made in the State.

In a follow-up operation on Thursday, the PSNI searched four premises linked to republican political party Saoradh. The party confirmed the raids in social media posts.

“The properties were searched under [the Terrorism Act] legislation as part of Operation Arbacia, a community safety operation,” she said.

PSNI officers secured a three-day extension to the period they could detain the suspects arrested on Tuesday, meaning they can be held for questioning without charge until Saturday.