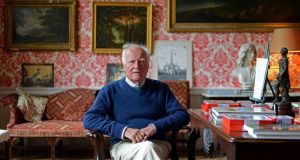 Desmond Guinness, a descendant of Arthur Guinness and co-founder the Irish Georgian Society, has died aged 88.

The society said Desmond Guinness had “boldly championed the cause of Ireland’s architectural heritage at a time when it faced great challenges through neglect and threat of demolition from new development”.

Desmond Guinness, who was the great-great-great-great grandson of Arthur Guinness and an heir to the Guinness brewing fortune, helped to establish the society in 1958 in response to plans to demolish Georgian houses at Kildare Place in Dublin.

He said that thanks to this hard work “we are surrounded by a rich legacy of historic buildings saved to be celebrated as an integral part of our culture and identity”.