Analysis of radiography department calls for increase in staffing levels 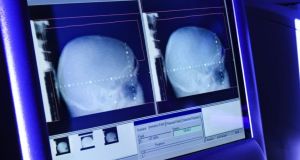 File image of a CT scan on a screen.

Staffing numbers at the radiology department of University Hospital Kerry (UHK) in Tralee should be increased, but work practice changes are also required, according to a Health Service Executive report.

The examination by senior HSE executives from other parts of the country as well as local hospital management was carried out before serious questions were raised about the work of one consultant radiologist.

However, the HSE team highlighted the high number of procedures being carried out later in the day by consultant radiologists compared with other hospitals.

The department at the hospital has come under scrutiny following revelations that a number of serious cases, including cancer cases, were missed or misdiagnosed by a doctor.

The review found that all ultrasound referrals by GPs across Kerry and parts of surrounding counties were carried out by consultant radiologists out of hours , after 5pm.

Meanwhile, local GPs have no access to computed tomography (CT) scans, unlike the situation in other hospitals around the country such as Midlands Regional Hospital in Tullamore.

The review group said that while total activity levels in the department in Kerry were comparable with other hospitals such as Sligo, it seemed that vis-a-vis the situation in other hospitals for ultrasound and CT a significant proportion of procedures were being carried out after 5pm.

The review group said that out-of-hour activity levels for a hospital of the size and scope of UHK seemed to incorporate a high level of non-inpatient activity, particularly carried out by consultant radiologists.

The review group recommended that this practice should be reviewed with thought given to the introduction of alternative arrangements.

The group also suggested that the cost of the provision of ultrasound procedures by consultant radiologists in twilight hours should also be reviewed vis-a-vis the appointment of an ultrasonographer as an alternative arrangement.

Overall the review group found that staffing levels in the radiography unit should be increased.

It said that at the time of the review there were 22 whole-time equivalent personnel with one on paid sick leave and three temporary staff.

The group said that in the context of service pressures and recent developments, a staffing level of 24 whole-time equivalents , excluding long-term leave requirements, would appear reasonable in the light of workload demands on the service in the recent past.

The report said the financial sustainability of having 24 whole-time equivalent staff would need to be secured. It suggested converting the temporary staff to permanent personnel.

The group suggested that under the proposed 24-member staffing complement, three whole-time equivalents would be allocated to CT examinations and three others to ultrasound work.

The group proposed that there should be a review of start times and lunch breaks during core hours in the context of the available skill set.

The review said the availability of CT scanning services on call in Kerry was ahead of other similarly-sized hospitals.

However, it said this came with additional pay costs and had implications for the availability of staff the following after after they were on call.