Nurse took own life with anaesthetic drug at children’s hospital 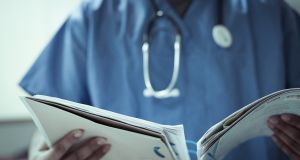 The coroner said there should be local operating procedures or guidelines in relation to storage of fluids and drugs used in anaesthesia. File photograph: Getty Images

A theatre nurse at Our Lady’s Children’s Hospital Crumlin took her own life using a common anaesthetic drug readily available in operating theatres open to all clinical staff, an inquest has heard.

Sandra Doran (39) from Templeogue in Dublin was found dead in a parents’ accommodation area on the second floor of the hospital on June 14th, 2016, with a tube inserted into a canula in her thigh and attached to an infusion bag.

The bag was found to contain a milky substance which was found to be propofol, which is used as an anaesthetic and which depresses the central nervous system.

The drugs cytosine and lignocaine were also in the infusion and there were drug vials and other items on the floor in the room, the inquest heard. A suicide note was also recovered.

The cause of death was found to be the unmonitored administration of propofol. Dublin City Coroner Myra Cullinan made a finding of death by suicide.

Ms Doran had a history of mental illness and self-harm and had previously attempted suicide, the inquest was told.

Her mother, Philomena, had become concerned after Sandra left the house two days prior to her death after having been found in a collapsed state in her room during that weekend.

After a “beeping” noise was reported coming from one of the parents’ rooms for up to two days before the nurse was found dead on the hospital premises, staff at the hospital attempted to gain access. But they found it locked from the inside. Maintenance staff removed a glass panel from the door on the Tuesday morning and saw Ms Doran’s body inside.

Effort were made to resuscitate her but the inquest heard that there were already signs of death when staff at the hospital entered the room.

After gardaí called to inform Sandra’s mother of her death, she went immediately to her daughter’s room and found a number of vials of a substance.

Mrs Doran told the inquest she found an “astonishing amount of drugs” in the room.

“I was absolutely gobsmacked by the amount of drugs that were there,” she said.

Questioned by Dr Cullinane about how Ms Doran might have been able to get access to the propofol, the hospital’s director of nursing Rachel Kenna said the substance was not a “controlled” drug in the same way as drugs such as morphine.

Ms Kenna said there was so much of the drug in stock because it was so commonly used. It was kept in each of the nine operating theatres and in a general stock room and all medical and nursing staff had access to these areas.

“It would not be obvious that anything was missing,” she said.

Ms Doran had been a “competent practitioner” and Ms Kenna said she had no reason to have any concerns about that.

The hospital also used “hundreds” of vials of propofol per day, the inquest was told.

Questioned by Dr Cullinane about whether there had been any changes to procedures for accessing non-controlled drugs since Ms Doran’s death, Ms Kenna replied there had not.

Dr Cullinane said the postmortem carried out by pathologist Dr Linda Mulligan indicated the most significant finding was propofol in the deceased’s blood and urine.

Reading from Dr Mulligan’s report, she said it was a commonly used anaesthetic agent and was not a controlled substance. When given intravenously it affects the central nervous system and rapidly induced unconsciousness.

Dr Cullinane said she drew to the attention of Crumlin hospital publications by the Royal College of Anaesthetists and others in relation to the monitoring of non-controlled drugs. She said there should be local operating procedures or guidelines in relation to storage of fluids and drugs used in anaesthesia.

Certain recommendations included that where an operating theatre was unoccupied that storage cupboards should be locked.