Press officers may be moved to other departments as communications streamlined 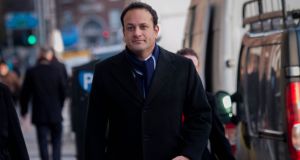 At its final meeting of the year on Tuesday, the Cabinet signed off on a number of measures related to the controversial unit.

Mr Varadkar has faced opposition criticism over the creation of the SCU, which will cost €5 million next year.

The Taoiseach and Government spokespeople have insisted, however, that the unit was created to streamline communications and messaging across Government.

As part of this approach, the Government on Tuesday tasked the SCU with creating one online portal – gov.ie – to take in all Government departments.

It means that, for example, the Department of Health will no longer have its own dedicated website but will be housed under the new gov.ie website to be created by the SCU.

Speaking after the Cabinet meeting, Mr Varadkar’s spokesman said there are currently about 700 communications staff across Government departments and agencies whose websites could come under the new umbrella. He denied the SCU is used by Fine Gael for party political purposes.

The unit has introduced one brand – “Rialtas na hEireann/Government of Ireland” – which is used by all Government departments.

The spokesman said there “may well be redeployments” due to this work by the SCU.

The Government also said the funding for the SCU comes from the Department of the Taoiseach, which has seen its budget for 2018 reduced.

The campaigns to be driven by the unit next year include one aimed at keeping businesses and the public informed of the effects of Brexit, the “Healthy Ireland” initiative designed to promote healthy lifestyles, and the State’s flagship Rebuilding Ireland policy framework to solve the housing crisis.