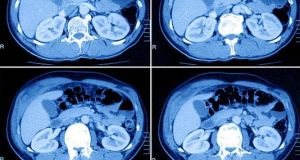 The scans examined, including X-rays, cat scans and ultrasounds, relate to work carried out by one individual who is no longer working at the hospital. Photograph: Getty

University Hospital Kerry is reviewing some 46,000 scans related to more than 26,000 patients after it was notified of three delayed diagnoses among patients.

The South/ South West Hospital Group, of which the hospital is a member, confirmed it was investigating patient safety concerns after receiving notification of the three serious reportable events.

It is understood that all the scans, including X-rays, cat scans and ultrasounds, relate to work carried out by one individual who is no longer working at the hospital.

In a statement, the group said a “look back” process with independent oversight was now underway on “a portion of radiology investigations carried out between March 2016 and July 2017”.

“This review is expected to be completed within eight to 10 weeks,” the hospital group said. “A clinical co-ordinator has been identified to co-ordinate as necessary with patients, arranging appropriate clinical follow-up. Any patients deemed to require urgent intervention will be immediately contacted before the full audit is complete.”

Dr Claire O’Brien, clinical director at University Hospital Kerry, told RTÉ there had been some serious cases of delayed diagnoses at the hospital and she wanted to apologise to families for distress caused.

The review of the files at the Tralee hospital started at the end of October and, as of last Friday, a total of 18,000 had been reviewed. Only a very small number have resulted in patients being called back.

The chairman and members of the HSE South Regional Health Forum said the public should have been informed sooner about the issues. Cllr Bobby O’Connell (Fine Gael) said he only learned of the review on Sunday afternoon through the media.

“No-one in the HSE mentioned this to us. I am extremely disappointed that as chairman of the HSE, I was not informed about what was happening in my own area. This review should have been made public at the earliest opportunity.”

His colleague on the health forum, Cllr Brendan Cronin (Independent) expressed sympathy to the patients involved.

He said he was “shocked” to learn of the extent of the review. “My first concern is the people involved and my heart goes out to them, thinking they have the all clear and now a week before Christmas they do not know where they stand.”

Such “tightness with information” was typical of the HSE and “part and parcel” of the way they operated but it was extremely disappointing for the public, he said.