‘Ireland should be proud of educational pioneer Nano Nagle’ - McAleese 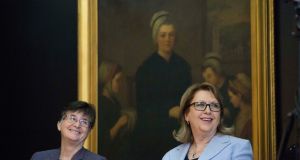 Ireland should be justifiably proud of founder of the Presentation Sisters, Nano Nagle whose pioneering work in setting up schools all over Ireland and beyond had left a lasting legacy, according to former President, Mary McAleese.

Speaking at the officially opening of Nano Nagle Place in Cork where a former South Presentation Convent has undergone a €10.5 million redevelopment, Ms McAleese said Irish people should be proud of their heritage including pioneers such as Nano Nagle.

“Now they have remade this place as a living showcase of the depth and breadth of Nano Nagle’s work, a place where the history she made is told and the work of care continues in these changed times,” said Ms McAleese as she congratulated all those in transforming the historic buildings.

She noted that the redevelopment of the historic 18th century site involved the establishment of an impressive heritage centre with an interactive experience telling the story of the Presentation Sisters as well as the creation of tranquil gardens, a garden cafe and a design shop.

The former convent building, which dates from 1779, now houses as an archive for the congregation while the site, which was adjacent to Cove Lane where Nano Nagle founded her first school for the poor in 1754, is also home to Nano Nagle’s tomb which is free for people to visit, she noted.

And in keeping with Nano Nagle’s educational mission, Nano Nagle Place also serves as home to the Lantern Community Project which runs community education and support projects and to a Cork Migrant support facility which hosts community inclusion projects.

Lord Mayor of Cork, Cllr Tony Fitzgerald said the development of Nano Nagle Place was “a fabulous addition to the Cork City Historic Tourist Trail” and he believed it would attract people from all around the world whose lives had been touched by the Presentation Sisters.

“Nano Nagle Place is situated in the heart of Cork’s South Parish and I know the surrounding community are proud that the legacy of such a great Cork woman is now going to be celebrated and shared with future generations,” he said.

Sr Mary Deane, Congregational Leader of the Presentation Sisters Union, said that the official opening of Nano Nagle Place could not be more apt as next year the congregation will celebrate the tercentenary of the birth of Nano Nagle at Ballygriffin near Killavullen in North Cork.

“Today we celebrate the transformation that is Nano Nagle Place. It is truly amazing and we are grateful to so many who have made this possible. Nano Nagle Place holds the vision and the dream that honours the past and yet is an expression of our living heritage.

“It is a prophetic witness of the power of Nano’s story and our story in finding new ways to respond to the needs of our world today in order to be a sign of hope for the future,” said Sr Mary who paid tribute to all involved in the successful transformation of the site.