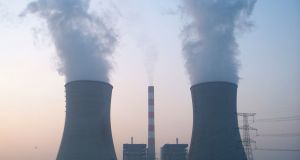 Has the global transition from fossil fuels to clean energy gone into reverse? The alarming question is being posed by no less an authority than Spencer Dale, chief economist with BP, one of the world’s “supermajor” oil and gas companies.

At first glance, the latest figures make for uncomfortable reading. Overall energy demand is up. Coal consumption is also up, for the first time in four years. And, perhaps most shockingly of all, greenhouse gas carbon emissions are rising again, after three years of little or no growth following a promised new era of international consensus on fighting climate change with the Paris Agreement in 2015.

To answer Dale’s question, we need firstly to drill down into the figures.

Global demand for energy rose 2.2 per cent last year, up from 1.2 per cent the previous year and above its 10-year average of 1.7 per cent.

Unusually strong growth in the 35 countries affiliated to the international economic body the OECD was mainly responsible for the rise – growing prosperity in EU member states in particular.

But last month, the European Parliament and European Council struck a new binding renewable energy target for the EU for 2030 of 32 per cent. It is expected to lead to an accelerated adoption of electric vehicles as well as expanded solar and wind energy use.

The deal includes a tightening of rules on biofuels used in transport, notably crop-based fuels such as palm oil. Also stitched in are a range of “citizen energy” measures such as the exemption of rooftop solar panels of under 25 kilowatts from grid charges.

A new target of 14 per cent renewable energy in transport, including incentives for electric vehicles, has been set.

In China, after a few years in the doldrums, the second-largest economy in the world bounced back with impressive growth last year – and with it an increasing demand for energy. Consumption was up by more than 3 per cent, almost three times the rate seen over the past couple of years.

China alone is behind a third of the rise in overall global energy use. This is partly down to its huge industry. In Westernised economies, industry accounts for slightly more than a fifth of a country’s energy needs. In China, industry uses more than half.

Added to this problem is the predominant use of coal to fire power stations as well as direct burning in the likes of the ceramics and steel sectors. In its long-awaited 2018-2020 pollution action plan, published earlier this month, China’s State Council has vowed to cut coal consumption, boost electric vehicle sales and shut more outdated steel and coke capacity in the coming three years.

Although China is a major culprit in coal consumption, the mini-revival in the dirtiest of big fossil fuels has been fired up mostly by India

In its ongoing “war on pollution”, the aspiring superpower is expanding its battleground to cover 82 cities, and the major coal-producing provinces of Shanxi and Shaanxi have been added to the list of “key” pollution control regions.

The new plan will also cover the heavily industrialised province of Henan in central China, as well as the Yangtze river delta, which includes the provinces of Anhui, Zhejiang, Jiangsu and the region around Shanghai.

Although China is a major culprit in coal consumption, the mini-revival in the dirtiest of big fossil fuels has been fired up mostly by India. State-run Coal India, the world’s second-largest coal mining company, can’t keep up with demand at home, despite more than 200 million Indians having no regular access to electricity, and the country is increasingly turning to imports.

But as the impact of fossil fuel use becomes ever clearer on the environment, Delhi is renouncing a decade-old plan to power its economic resurgence almost entirely on coal, with a promise in June this year to reinvent itself as a green energy leader.

A target for the amount of renewable energy capacity it plans to install by 2022 has been raised to more than 227 gigawatts from a previously ambitious 175 gigawatts.Plans include a tender “in the near future”, according to Indian power minister RK Singh, for 100 gigawatts of solar power – 10 times the size of the current largest solar tender in the world.

As the price of renewable energy continues to plummet (one report estimates the cost of solar and wind in India is now half the price of coal), the country is predicted to reduce its reliance on fossil fuel.

Some further hope can be taken from the latest BP statistical view of world energy, the definitive snapshot of global energy consumption, which shows that around 60 per cent of increased global energy use came from both renewable energy and gas. Natural gas was the single largest contributor, notably driven by a surge in its use in China. In the US, also, utilities are increasingly turning to natural gas, with predictions there that it will fuel half of all power plants in the coming years.

And, despite US president Donald Trump pulling out of the Paris Agreement, dozens of the country’s largest companies, including the likes of Apple and Google, are pumping billions of dollars into new wind and solar projects. Renewables currently make up a fifth of power generation in the US.

In South Korea this month, Samsung followed the lead of its US tech counterparts by announcing its plans to transition to entirely renewable energy in its offices and factories in the US, China and Europe over the next two years.

Elsewhere, Sweden is on course to reach its 2030 renewable energy target later this year after the installation of more than 3,500 wind turbines.

Coal emerges as the biggest loser in the long run. The future electricity system will reorganise around cheap renewables

Globally, there has been a steep rise in the use of renewables last year, predominantly wind and solar power, which are up by 17 per cent. It is the largest yearly increase on record. Wind provided more than half of the growth, while solar contributed more than a third. Renewable power now makes up 3.6 per cent of the world’s energy consumption, compared to the 23.4 per cent from natural gas, according to the BP report.

Debate rages on the respective roles of both in powering future energy needs. The recently published Bloomberg New Energy Finance report puts the wind at green energy’s back. The research firm forecasts coal use will drop from 38 per cent to 11 per cent by 2050, while wind and solar electricity will make up half of world’s energy mix by the same time. It further predicts a 38 per cent drop in greenhouse gas emissions over the same period.

“Coal emerges as the biggest loser in the long run,” said Elena Giannakopoulou, head of energy economics at Bloomberg New Energy Finance. “The future electricity system will reorganise around cheap renewables – coal gets squeezed out.”

Furthermore, the study foresees natural gas being used mostly as a back-up to renewable energy, dropping to just 15 per cent of the global energy mix by 2050.

Which brings us back to Spencer Dale’s question on whether the global transition from fossil fuels to clean energy has gone into reverse.

“I would caution against being too alarmed by the recent data,” he says of his own company’s headline figures. “We always knew that some of the exceptional outcomes seen in recent years reflected the impact of short-run cyclical factors, as well as longer-term structural forces shaping the energy transition. And, sure enough, some of those short-run adjustments came to an end last year.

“But many of the structural forces shaping the energy transition continued, particularly robust growth in renewables and natural gas. Last year’s energy data is perhaps best seen as a case of two steps forward, one step back”.

One in five young people have experienced abuse by partner, study finds 13:52
December sky: Jupiter and Saturn to appear closest to each other since 400 years ago 13:52
Boris Johnson confirms Santa is ‘ready and raring to go’ 13:42
Recipients of PUP to get Christmas bonus on December 8th 13:36
Woman threw TV off balcony injuring person walking below, court told 13:26