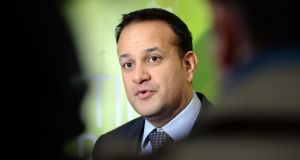 The electoral register is being used to select the assembly membership who will be “recruited at a national level and randomly selected to be broadly representative of Irish society”, the Taoiseach Leo Varadkar told the Dáil. File photograph: Eric Luke/The Irish Times

The search is underway for 99 members of the public to take part in the next citizens’ assembly in January.

Taoiseach Leo Varadkar has confirmed that the inaugural meeting of the assembly on gender equality will take place on Saturday January 25th and the first full meeting will take place from February 14th to 16th.

But he said he would have to consult officials, the assembly chair and party leaders about whether the assembly should sit during the three to four-week period of the general election next year.

The electoral register is being used to select the assembly membership who will be “recruited at a national level and randomly selected to be broadly representative of Irish society”, the Taoiseach told the Dáil.

Former secretary general of the European Commission Dr Catherine Day will chair the gathering which will assemble over six weekends in total. A secretariat team is also in place for the assembly’s deliberations.

Mr Varadkar said there had been “extensive engagement” with relevant experts who will address the assembly and a public consultation will be carried out on gender equality.

A research fellow is due to be appointed shortly to monitor and record how the assembly conducts its work, its “deliberative quality”.

Fianna Fáil leader Micheál Martin asked if the assembly had agreed “to adopt the precedent of other bodies established by the Oireachtas to suspend public activity during elections”.

The Taoiseach said it was a valid question about the three to four-week election period. “I am not sure whether it should sit but it is a pertinent question and I will consult officials”, the assembly chairwoman and party leaders.

Labour leader Brendan Howlin referred to the Taoiseach’s comments at a recent conference that the assembly would specifically focus on pay inequality. Mr Howlin said at the same conference a survey found that “better and more affordable childcare would do more to promote gender equality in the workplace than any other single action”. He called for the assembly to include the provision of quality, affordable childcare.

The Taoiseach told him childcare was among the issues in the assembly’s terms of reference.