Trinity College researcher awarded €2m for project on back pain 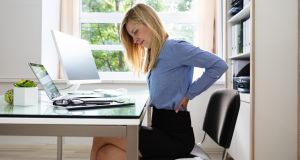 At present the only two treatment options for debilitating back pain are surgery. File photograph: Getty

An Irish researcher has been awarded €2 million to develop an alternative treatment to target back pain outside of invasive surgery.

Dr Conor Buckley, director of biomedical engineering at Trinity College Dublin, was announced as one of the recipients of the European Research Grant awards on Tuesday.

His project, which applies engineering principles to the field of medicine, seeks to better understand how cell regeneration could be used to treat back pain.

At present the only two treatment options for debilitating back pain are surgery to remove part of the disc, or an operation which removes the entire disc and puts in a spinal cage – a procedure known as spinal fusion.

“It’s about the degeneration of the intervertebral disk specifically. This is the kind of spongy cushion in the spinal column that allows movement,” said Dr Buckley. “As you get older the disc starts compressing and it bulges out, and it can press a nerve in the spine. That’s what causes pain.”

Dr Buckley’s project will inject cells into the spine to help it regenerate.

“It’s trying to develop an understanding of what are the conditions of the centre of the disk that would permit regeneration,” he added.

Dr Buckley said he has always been interested in the spine, which is partly what motivated him for the project, but also wants to “make a difference”.

The Trinity professor believes that developing a better understanding of cell-based therapy could allow patients to delay undergoing spinal fusion, which is a very invasive surgery.

“You may not overcome it, but think of the impact that would have on someone who is in their 30s or 40s who could delay it until they’re 50 or 60, what a difference in the quality of life that would make,” said Dr Buckley.

“They wouldn’t be out of work, reduced healthcare costs, physiotherapy or dependency on opiods. Therapies have to come a long way yet, but we have . . . huge potential here. It’s now about trying to apply them to the right people at the right time. Really trying to plan for the future,” he added.

Dr Buckley was one of six Irish researchers awarded grants on Tuesday. There were two other recipients from Trinity College Dublin.

“These awards, which fund frontier research, will enable their recipients to plan their research careers and further grow their teams here in Ireland, ” he added.