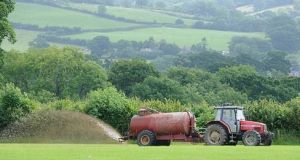 The Department of Agriculture has urged farmers not to spread slurry when rain is due to prevent run-off. Photograph: Getty Images

Farmers and environmental campaigners have separately called on the Government to increase funding available for environmentally-friendly farming to protect rivers and lakes.

The Irish Farmers Association said more than 40 per cent of all farmers in Ireland took part in the Department of Agriculture’s Green Low Carbon Agri-Environment Scheme (GLAS).

However, the programmed was “over-subscribed and closed to new entrants”, said IFA president Joe Healy, who called for a series of extra State supports for farmers.

He said ineffective waste-water treatment plants run by Irish Water around the country were causing more damage to rivers and lakes than farmers.

Farmers take part in the Agricultural Sustainability Support and Advisory Programme, operated by Teagasc and dairy co-ops, which offers advice on how to protect water courses.

Calling for the reopening of GLAS to new farmers and an increase in the €10,000 grant to those qualifying, Mr Healy said efforts were also needed to improve the quality of Irish soil by a national lime-spreading programme.

She said grants for better septic tanks must be made easier to get. People who knew their tanks were not adequate were “crying out” for inspections, but these could take years to happen.

The Department of Agriculture has a number of rules governing the use of fertilisers and the spreading of slurry:

* Not to spread slurry or use fertiliser when rain is due to prevent run-off;

* Not to spread both near ditches, streams and lake shores;

* Farmers should check their lands beforehand to discover how much phosphorus is needed, and not spread more than is needed;.

* Take extra care when spreading on heavy or wet soils, where fertiliser and slurry run-off is most dangerous;

Regarding nitrogen-based fertilisers, farmers are told not to spread too much since three-quarters of what is used is wasted.

* Make sure the soil fertility and soil pH is correct to get the best of the nutrients that are used.

Minister for Housing, Planning and Local Government Eoghan Murphy, who is responsible for water quality, said it was “now more important than ever” that everyone assisted the Government’s plans to protect rivers, lakes and streams.