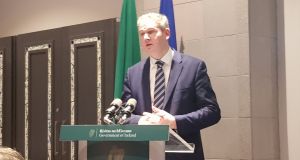 Minister for State for the Irish Language Seán Kyne: people have the right to ‘simple things’ such as the síneadh fada in a person’s name and their address spelled correctly. Photograph: Éanna Ó Caollaí

A fifth of new recruits to the civil service should be able to speak Irish competently, according to proposed new legislation to improve the delivery of public services in the Irish language.

The Official Languages (Amendment) Bill 2019 was approved by Cabinet at its weekly meeting on Tuesday morning and is due to be published on Thursday, but it will not make the one-in-five target mandatory.

Sometimes, public bodies failed to spell names correctly, while mistakes with addresses make up a sizeable portion of complaints made to the Coimisinéir Teanga (Irish language Ombudsman) each year.

The Bill provides for a national plan which will identify language gaps, harmonise standards between departments and agencies and require public bodies to recognise the use of the síneadh fada and addresses in Irish.

Work to change the 2003 Official Languages Act has been slow to achieve, said Minister for State for the Irish Language Seán Kyne, saying a previous draft “wasn’t strong enough”.

“It didn’t go as far as was needed,” said Mr Kyne, who added that people have the right to “simple things” such as the síneadh fada in a person’s name and their address spelled correctly.

The one-in-five civil service recruitment goal is “challenging and ambitious”, he said, though a deadline has not been set because it would be “impossible to come up” with one that could be justified today.

Currently, there are not enough Irish language speakers to fill such jobs, but the Government wanted to instil enthusiasm in students so that they “know that there are opportunities for Irish speakers”.

Conradh na Gaeilge’s Julian de Spáinn said they were pleased that the one-in-five target had been set: “That is something we have been pushing for since day one.”

However, a deadline needs to be set to ensure that targets are met, whether that is five, or 10 years: “We have to make a case now as to why we need this,” he said.