Rosie Shelley told court Ian Bailey said ‘I did it, I did it’ while discussing French woman’s death 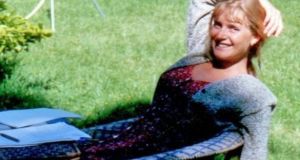 The death has taken place of Rosie Shelley, a witness in the Sophie Toscan du Plantier murder investigation.

The 49-year-old, who died at Cork University Hospital on Monday, testified at Ian Bailey’s libel action against seven newspaper publishers in December 2003 that she believed he was confessing to killing the French woman when he broke down when speaking about the murder to her and her husband, Richie Shelley.

Mrs Shelley told Cork Circuit Court that she and Mr Shelley were in Hackett’s Bar in Schull on New Year’s Eve 1998 when they met Mr Bailey and his partner, Jules Thomas, who invited them to their house for drinks.

She said that while they were in the home of Mr Bailey and Ms Thomas in Schull, Mr Bailey produced a file of newspapers clippings about the murder of Ms Toscan du Plantier.

She told the court that they spent almost two hours with Mr Bailey and Ms Thomas and the conversation was “almost entirely about the murder” with Mr Bailey leading the discussion.

Mrs Shelley said she began to get a bit nervous because she knew Mr Bailey was a suspect in the case and because he seemed so obsessed with the murder so they decided to leave but before they did, Mr Bailey broke down.

“It happened in the kitchen where I was waiting … he (Mr Bailey) came out, he put his arms around Richie, he was crying and he said ‘I did it, I did it’…It was very clear and succinct,” she said.

Asked by counsel for the newspapers, David Holland SC what she thought Mr Bailey meant when he said, “I did it, I did it”, Mrs Shelley said she believed he was admitting “that he had murdered Sophie Toscan du Plantier”.

Mrs Shelley’s testimony corroborated evidence given earlier by her husband, in which he said he also took Mr Bailey’s comment as an admission that he had killed Ms Toscan du Plantier.

Mr Bailey denied every making any such admissions but said that what he had told the Shelleys was that “people had said that he had done it” but Judge Patrick Moran said he accepted the Shelleys’s version of events.

Mrs Shelley did not testify in Mr Bailey’s High Court action for wrongful arrest against the State in 2014/2015 but Mr Shelley did and he repeated his libel case testimony and his belief that Mr Bailey was admitting the killing to him.

Mr Bailey (62), who was convicted in his absence earlier this year by a French court of the murder of Ms Toscan du Plantier, has denied any involvement in her killing and denied ever making any admissions that he killed her.

He has twice been arrested in the State in connection with the murder but has never been charged. The Director of Public Prosecutions ruled there was insufficient evidence.

Mrs Shelley was a weekly contributor to The Southern Star, writing a column on nutrition, and is survived by Mr Shelley, their teenage son Cian, her mother Hillary and brothers, Harry, Theo, Tully and Matthew.

She is the latest in a number of civilian witnesses in the Toscan du Plantier case to die in recent years, following Martin Graham, Jimmy Camier and Patrick Lowney. A number of gardaí involved in the investigation - including Det Garda Barth O’Leary, Chief Sup Tim Callaghan, Supt Liam Hogan and Garda Billy Byrne - have also died in recent years.