'Irish Times Debate' 2017 takes place at DIT Bolton Street on February 17. The motion: "This House believes the women of Ireland should strike to repeal the Eighth Amendment." Video: Conor Mulhern 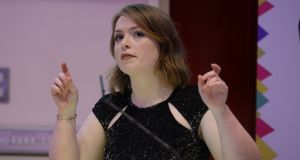 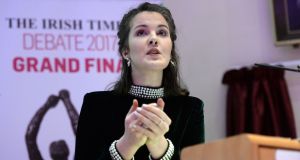 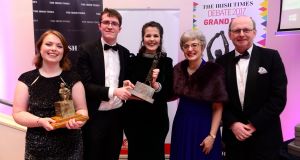 The opposition reigned supreme at The Irish Times Debate 2017 with Leah Morgan of the Solicitors’ Apprentice Debating Society of Ireland (SADSI) taking top prize in the individual category, while UCD won the team competition.

Contestants from Trinity College, UCD, UCC and SADSI were asked to debate on the motion: ‘This House believes the women of Ireland should strike to repeal the Eighth Amendment’, an allusion to the article within the State’s constitution that provides equal right to life for the mother and the unborn.

An impassioned, persuasive and humorous performance from Ms Morgan, who argued against the motion, was enough to see her win out over runner-up and SADSI colleague Danielle O’Riordan on the night.

Deriding the tactic of striking to highlight the issue of reproductive rights as “gesture politics” that will “fill us with the false catharsis of protest”, Ms Morgan’s suggestion to instead focus on voting more women into power who can influence legislation from inside government won over the judging panel.

The team of Dara Keenan and Aisling Tully representing the UCD Literary and Historical Society themselves produced a series of powerful orations which portrayed striking as a simplistic response to what is perhaps the most complex and divisive topic in contemporary Irish society.

Mr Keenan argued a strike would only serve to alienate those undecided on the topic of the Eighth Amendment from the perspective of the organisers, while Tully branded any such action as “the wrong beginning to a story that will go down in Irish history”.

Just as SADSI dominated the top honours in the individual section, UCD provided a one-two finish in the team category with Sandi Ndeble and Kevin Brennan putting in a polished performance for the university’s Law Society to finish second.

Arguments over whether working class women should be encouraged to forgo a day’s pay in order to voice their views on reproductive rights proved a common theme across many speeches, as did the potential polarising effect of a strike on public opinion.

The 2017 debate was hosted by DIT’s Law and Debating Society, and guest of honour and Minister for Children and Youth Affairs Katherine Zappone chaired proceedings.

Addressing the 350 observers in attendance the minister reflected on the role of women in Irish society and made reference to previous women’s strikes, most notably in her native USA in 1970 and in Iceland five years later.

Regarding the upcoming Strike 4 Repeal on 8th March, Ms Zappone articulated her full support for the initiative and termed it a “useful way” of making politicians aware of demands to widen access to abortion within the State.

“Striking for repeal in Ireland in 2017, just like striking for equality in the USA in 1970 and Iceland in 1975, is one more way of making clear the scale, and the persistence, of those demands,” she said, adding that striking alone will not achieve the movement’s aim of repealing the Eighth Amendment.

The victors will also take part in an all-expenses-paid debating tour of the USA courtesy of the National Parliamentary Debate Association of America.

The month-long trip will involve a guest of honour appearance at the New York St Patrick’s Day parade as well as visits to Miami’s famous beaches, the Jack Daniels distillery in Tennessee and a tour of Nashville, the global centre of country music.

The eventual winners emerged from a field of 48 semi-finalists who performed in four semi-final rounds in January after around 300 contestants took part in the first round in early November.