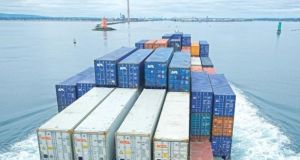 Dublin Port says it aims to handle increased shipping, with a particular focus on the south side of the Liffey

Dublin Port Company has denied that its revised masterplan will expedite construction of an eastern bypass across Sandymount Strand.

The port also says its “Brexit-proofed” plan will increase access by water users to the Liffey estuary, and open up access to the Great South Wall via a revitalised Pigeon House harbour.

Key aspects of a consultation document on the revised scheme, which has been on public display this week, include abandoning port plans to reclaim 21 hectares (52 acres) of Dublin Bay – a project already overruled by An Bord Pleanála on environmental grounds in 2010.

Instead, the port says it aims to handle increased shipping on its existing footprint, with a particular focus on the southside of the river.

This includes developing the Poolbeg peninsula for both roll-on, roll-off and load-on, load-off traffic, with some land reclamation.

The revised masterplan is based on larger cargo volumes than anticipated in 2012, with a predicted average growth of 2.5 per cent per year to 2040 now set at 3.3 per cent annually.

The plan includes a new river crossing or expansion of the existing East Link bridge to four lanes between the Dublin Port Tunnel and south port area , as proposed under the Transport Strategy for the Greater Dublin Area 2016-2035. This may include provision of a cycle route.

Addtional delineation of an eastern bypass route on Dublin Port design maps does not signal that this option is integral to the port masterplan, a spokesman said.

The port spokesman said that the bypass route - making the M50 a circle- was only included to reflect existing State policy .

“Effectively, this is to ensure we sterilise land that might be needed for a possible bypass in the future, but it is certainly not something we are pushing,” he said.

When the port secured planning permission for its Alexandra Basin redevelopment,it said it had engaged extensively with relevant authorities to ensure the project was compatible with construction of an eastern bypass in the future.

An eastern bypass – with variations under or over Sandymount Strand – is already included or mentioned in a 10 reports, plans and draft plans by various State bodies.

The National Transport Authority’s (NTA) 20-year strategy for the greater Dublin area includes the first section of the route from the Dublin Port Tunnel to the south port area, and retention of a “route corridor” from the docklands to the “southern cross/southeastern motorway” where the M50 and M11 meet.

“We welcome Dublin Port’s consultation on this new plan, but one of our issues relates to fears about increased traffic from the southern port, which may also require an expanded road from the East Link,”she said.

“This would then (be) feeding into what could become an eastern bypass – with the NTA already working on an alternative to Merrion gates, as announced recently”she said.

SAMRA said it had no issue with north-south port traffic, and welcomed as “sensible” the decision to use 44 hectares of lands purchased near Dublin Airport as an inland port.

The plan involves possible relocation of marine leisure clubs, including Poolbeg Yacht Club and Stella Maris rowing club, to land close to the East Link bridge. An additional three hectares of this land would be developed for commercial use as a “buffer zone” between residential areas and port activity.

The plan poses “no threat to moorings” on the river, which may be re-organised with an expansion of pontoons, a port spokesman said.

The old Pigeonhouse harbour would be redeveloped for public amenity as a joint venture with its owner, Dublin City Council.

The plan includes relocation of seabird colonies of terns on floating pontoons off the Great South Wall, re-establishment of a Liffey ferry service and development of the port heritage trail,

The port’s “roadshow” has elicited mixed reaction this week, with water users including Jimmy Murray of the Irish Nautical Trust welcoming provision for river craft activity.

“Dublin Port has been working closely with the clubs for some time, and there is going to be improved access,” Mr Murray said.

Engineer and diver Peadar Farrell of the Protect Dublin Bay Group, which has highlighted issues about the impact of port spoil dumping on marine life, has questioned the logic of further investment in the port, when British exit from the EU could result in a drop in shipping traffic.

He said he believed development of Rosslare port, Co Wexford, would make more economic and environmental sense, given its ability to move freight by rail.

The port has pointed to the increased frequency direct shipping between continental Europe and Ireland, including deliveries via the Belgian port of Zeebrugge for supermarket chains Lidl and Aldi, and said this would only grow after Brexit.

Labour Party councillor Dermot Lacey said he was disappointed that the port hadn’t reacted more favourably to the proposal for a film studio at Poolbeg.

He said the eastern bypass could become an out-dated concept, given the rising cost of car ownership and the fact that public transport development is an integral part of plans for the Poolbeg Strategic Development Zone (SDZ ).

“Whatever happens, no one wants to see a road across Sandymount Strand, but I find it incredible that we can even think of developments such as an incinerator overlooking this area,” Cllr Lacey said.

“The Mayor of Paris spends money on providing beaches in the middle of the capital, and here we are with a wonderful beach within two miles of our city centre and we can only think of it in terms of building on it,” he said.

The non-statutory consultation document can be viewed at dublinport.ie/masterplan and submissions can be made until March 7th.