‘I have never seen anything like it, it was just a sea of yellow. And the noise was unbelievable’ 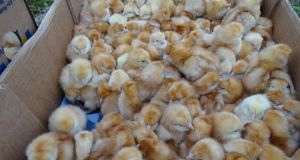 Undated RSPCA handout photo of some of around 1,000 day-old chicks that were abandoned in a field in Cambridgeshire. Photograph: PA

Around 1,000 day-old chicks have been abandoned in a field in Britain.

Royal Society for Prevention of Cruelty to Animals (RSPCA) inspectors said members of the public made the discovery of the newly-hatched chickens in a field in Crowland, near Peterborough, in Cambridgeshire on Friday.

Many of the chicks are believed to be in good health, although some had died while others had to be put down due to their injuries, the animal welfare charity said.

It is believed the chicks came from a commercial chick producer and may have been abandoned by a third party.

The producer is fully cooperating and assisting the RSPCA with their investigations.

RSPCA inspector Justin Stubbs said: “I have never seen anything like it, it was just a sea of yellow. And the noise was unbelievable.

“The chicks are only about a day old and are really tiny and quite delicate.

“Some of the birds were dead or dying when we arrived so some, sadly, had to be humanely put to sleep.

“Thankfully, most of the chicks did not appear to be suffering.

“The breeder came to the scene to collect the surviving birds and take them back to their unit.

“These tiny birds wouldn’t have survived long out on their own at such a young age and in such unpredictable weather conditions.

“For someone to dump these vulnerable chicks is unbelievable.”