Only 4.4 per cent of people report using online education over past three months 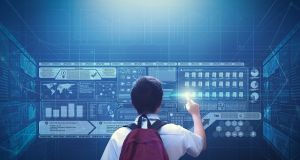 Students in Ireland have less access to digital resources than those in other OECD countries, a new report says.

Students in Ireland have less access to digital resources than in most Organisation for Economic Co-operation and Development (OECD) countries, and only 4.4 per cent of people report using online education over the past three months – well below the average.

The How’s Life in the Digital Age research published by the international economic development body on Tuesday says Ireland shows average performance both in exposure to the risks of the digital transformation as well as in the extent to which it reaps the benefits.

But it notes that while internet access here is above the OECD average, internet use is slightly below, as are adult digital skills.

“At the same time, digital security risks are low, and very few people in Ireland report having been exposed to disinformation,” the report says.

However, Irish 15-year-olds report incidents of cyber bullying “at comparatively high rates and are more likely to use the internet for extreme use”.

The report says measuring the prevalence of cyberbullying is “difficult”, however.

It says most surveys in this area rely on self-reported information, which face inherent problems as victims may not be willing or able to report.

It notes that on average, 9 per cent of 15-year-olds report having experienced cyberbullying at least once in their life, with girls reporting victimisation more often than boys in all countries except in Denmark, Israel and Spain.

“Cyberbullying is particularly prevalent in a number of eastern European countries and in Ireland and the United Kingdom. Conversely, children in Greece, Iceland and Germany report relatively few instances of cyber bullying,” the OECD report adds.

It also notes the information industries in Ireland contribute significantly to employment, comprising 4 per cent of total employment. It says this is higher than the OECD average, but that the share of computer-based jobs is also associated with higher rates of job stress and worries about work outside of work hours than in other countries.

It further adds that digital technology can improve our lives but that it also poses “a major risk of widening social inequality and blocking opportunities for people without the skills to navigate the online world safely”.

The report uses the 11 dimensions of the OECD’s well-being framework to assess the risks and opportunities that people face in their experience of the internet, mobile devices, big data and artificial intelligence across countries.

The report noted, however, that the conclusions drawn were based on “an imperfect set of indicators that do not adequately cover all life dimensions and OECD countries”.

It says national statistical offices and other data collectors will need to design new instruments to improve the evidence on the well-being impacts of the digital transformation.