Philomena Canning suing over suspension of indemnity insurance in 2014 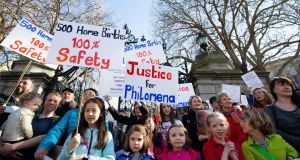 Dozens of supporters of independent midwife Philomena Canning gathered at Leinster House on Tuesday to deliver a petition to Minister for Health Simon Harris, calling on him to instruct the Health Service Executive to settle the terminally-ill woman’s case against it.

Ms Canning, who has ovarian cancer, has taken a case over the HSE’s withdrawal of her indemnity insurance to practise as a midwife pending an investigation into two alleged safety risks brought to its attention in 2014.

One of the cases involved a post-partum haemorrhage, a loss of blood soon after childbirth. Neither of the two women had complained and both were happy with the care they obtained from Ms Canning.

Her indemnity was restored in February 2015, but she could not practise until the HSE carried out a systems analysis.

Ms Canning’s midwifery practices were exonerated by both her own and independent experts following that analysis. She wants her case against the HSE settled and compensation paid so that she can get access to the drug Pembro, which costs €6,000 a dose and which would be required once every three weeks.

The midwife said last week that time was running out for her legal action as there was no “due process” in her dismissal and no evidence against her.

Her friend and former client Ciara Considine said on Tuesday: “We are gathering firstly to express our fury at the inhumane treatment by the HSE of a revered midwife who faces a terminal diagnosis, and to urge Minister for Health Simon Harris to ensure that her express wishes are immediately granted.”

Mr Considine said those present, who included friends, family, activists and former clients, were gathering “in celebration of a giant among women”.

“Philomena has touched all our lives, whether it be through her midwifery or activism, or simply as a loyal and loving friend.

“She has fought all her life for women’s rights in childbirth, to autonomy, to respect, to the right to choose, and has been a leading advocate here and internationally for natural birth. We salute her and express our love and gratitude – and we let her know that, just as she was there for us when we most needed her, we are here for her now – to hold her, to carry her, to fight for her until she gets the justice she so richly deserves.”

Mary Gallagher, who was among those gathered on Kildare Street, said she had had two home births with a domiciliary midwife but she did not know Ms Canning personally.

Niamh McGinty from Dublin was at the protest with her nine-month-old baby Ultan and daughter Ana, aged three.

“I came along just to support Philomena because I feel very passionately about all the work that she has done over the years and the injustice she has received.”

“I think that she has suffered a lot over the years and it’s the stuff of nightmares really that this is allowed to happen to somebody after all the work that she has done,” Ms McGinty added.