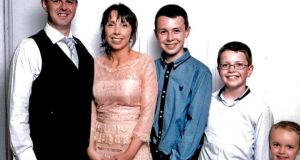 The chief executive of St Patrick’s Mental Health Services has said Clodagh Hawe’s family are doing the State a “massive service” by asking for an investigation into the murder of Hawe and her three sons.

His late wife’s family said on Monday that Alan Hawe wrote notes, transferred money into a bank account and “went about his business while his family were dead around him”.

They believe the deaths were linked to an issue he had at work and not depression as inquest evidence into the deaths suggested. Alan Hawe took his own life after killing his wife and children.

The head of St Patrick’s Mental Health Services, Paul Gilligan, said on Monday that with “these types of horrendous cases we need to look at them in a different manner to try to find out why they happened. We need to find out what are the root causes of these events so that we can try and prevent them,” he told RTÉ’s Morning Ireland.

“There’s a lot of stigma around mental health and we’re adding to that stigma if we don’t investigate these acts further to see if, and when, they can actually be attributed to mental health difficulties,” said Mr Gilligan.

“We need the true facts. The family are doing us a massive service by asking for the investigation to be reopened,” he said.

In an interview special on RTÉ’s Claire Byrne Live show on Monday night Clodagh Hawe’s mother Mary Coll said her daughter confided that her husband told her he had been watching pornography and subsequently went for counselling.

Ms Coll and Ms Connolly called on Garda Commissioner Drew Harris to establish a special investigation unit for familicide and family annihilation. They also suggested that in such cases once an inquest concludes a book of evidence should be published.

Clinical director of the Central Mental Hospital Dr Harry Kennedy said mental health was not a simple issue to address. “The problem . . . is that it is very diverse and it needs a diverse approach. There isn’t a perfect solution. All solutions require a certain amount of compromising,” he told RTÉ’s Today with Sean O’Rourke show.

Gillian Dennehy of Women’s Aid commended the family on their bravery. But she said such incidents were not isolated, with an average of 10 women being killed each year by their partner.

“What we’re looking at here is domestic abuse. It was a final act of control; this family was living in fear for a long time.”

She called for a review of domestic homicides and for legislation to address the issue. “We need answers. Why are women and children being killed; this can happen again,” she warned.

On Claire Byrne Live, Ms Coll and Ms Connolly said Alan Hawe was in conflict with a work colleague, had contacted teaching union the INTO and in his suicide letter expressed concern that “the truth was going to come out”.

Clodagh Hawe’s family only saw his suicide letter 16 months after the murders and have called for all information gathered in the course of an investigation to be shared as soon as practicable with the next of kin.

Her family also called on Minister for Justice Charlie Flanagan to amend the Succession Act which makes the perpetrator, or if deceased their family, a beneficiary of the estate rather than the victim’s family.

The family also want a review of the Coroner’s Act on exhumations because the perpetrator’s family, and not the victim’s, have control.

In the immediate aftermath of the deaths Alan Hawe was buried with Clodagh Hawe and their sons. But when the family wanted that circumstance altered, the exhumation could not take place until his next of kin agreed and his family applied for him to be moved.

Anyone affected by issues in this story can contact: