Ires named as preferred bidder for portfolio of 815 apartments 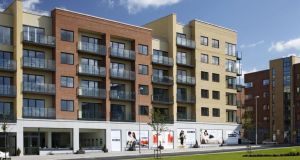 Included in the sale were 128 units at Northern Cross in Dublin.

Ires, the largest private landlord in the State, has been named preferred bidder for a portfolio of 815 apartments located across the state

The publicly quoted property investor is set to pay in the region of €285 million for the apartments, making it the largest single property sale this year. It is the largest single disposal of buy-to-let properties to have taken place in the Irish market so far.

The apartments, which were sold by Marathon Asset Management, are spread across 16 different developments, giving the batch of apartments its name – the XVI portfolio. Final bids were submitted on the apartment portfolio last Wednesday.

It is thought that Ires saw off competition from Avestus Capital Partners, the real-estate company founded by former Quinlan Private executives; Urbeo, the State-backed residential platform which is also supported by Starwood Capital; and Orange Capital Partners, the Dutch property investor which made its debut in the Irish market last year.

The portfolio had been put on the market for €240 million, with the premium to asking price paid by Ires indicative of the still-strong demand among investors for exposure to the Irish rental market. Market sources suggested that Ires may have to tap investors again to raise fresh equity for new purchases following the deal.

He said: “Tax incentives are brought in at a time to stimulate particular activity but are then removed at a later period when they are no longer necessary.”

As previously reported by The Irish Times, this review is likely to be included in the Tax Strategy Group’s option papers, which are published during the summer and are designed to inform options for the budget in October.

Marathon Asset Management purchased the majority of the units from the National Asset Management Agency in 2015, in a loan sale process dubbed Project Plum by the State’s toxic debt agency. The New York company paid Nama €120 million for 588 of the apartments now being sold to Ires.

The largest consignments of apartments within the portfolio are at Carrington Park in Northwood, Santry, where 142 units traded, and Northern Cross in Dublin, where 128 units were included. There were also 12 houses included in the deal, which are located in Smithfield.

The deal was guided over the line by selling agents Eastdil Secured and Savills. The agents had told prospective bidders that they could take advantage of the tightness in the Irish rental market and increase rental income from €14.7 million to €17.7 million.

It comes after Marathon sold Heuston South Quarter in Dublin to developer Joe O’Reilly’s Chartered Land for €222 million, an increase of nearly €100 million on the price it paid to acquire loans secured on the apartment and office blocks when it purchased them from Lloyds banking Group in 2014.