Ross seeks inclusion of judges’ declaration of interests in Bill 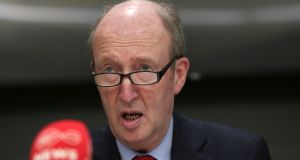 Shane Ross is said to have asked that his proposed changes be included before the Judicial Council Bill is put to the Dáil. Photograph: Laura Hutton

Minister for Transport Shane Ross has asked that an obligation requiring judges to publish a declaration of interests be included in judicial reform measures working their way through the Oireachtas.

Mr Ross surprised his Fine Gael ministerial colleagues by asking once again for the mooted reform, which he and his Independent Alliance colleagues have previously requested.

The Dublin Rathdown TD, who has championed reforms to the way judges are appointed since entering government in 2016, raised the issue at the weekly Cabinet meeting on Tuesday.

He made the request in the context of a discussion on the Judicial Council Bill. Minister for Justice Charlie Flanagan sought Cabinet approval for amendments to the Bill, which will provide for the establishment of a personal injuries committee.The Bill is before the Seanad.

Sources said there was some resistance to Mr Ross’s suggestions, although it was not ruled out. It is understood Mr Flanagan pointed out that the Judicial Council Bill could pass through the Seanad and Dáil by the summer recess but any addition of a stipulation that judges should publish a declaration of interests could delay its enactment.

Mr Ross is said to have asked that his proposed changes be included when the Bill comes back to the Cabinet after being passed in the Seanad but before it is put to the Dáil. The Bill, if passed, would allow judges to recommend guidelines for injury payouts. It also allows for the setting up of a judicial council and aims to put in place, for the first time, a system to deal with all complaints about judges that fall below the level necessary to trigger impeachment.

The amendments to the Bill, approved by Cabinet on Tuesday, give effect to a recommendation of the Personal Injuries Commission, which was established by the Government to tackle the high cost of insurance premiums.

A Government statement said Mr Flanagan was proposing the establishment of a personal injuries guidelines committee within the framework of the judicial council mooted in the Bill.

“The committee will be comprised of judges and will be tasked with drawing up the guidelines taking account of factors including the level of damages awarded in personal injuries actions not just in this State but in other comparable jurisdictions,” the statement said.

“Guiding principles drawn from those set down in recent Court of Appeal decisions which affirm that modest injuries should attract modest damages will also be relevant as will the need to promote consistency in the level of personal injuries damages awarded by the courts in this jurisdiction.

“The courts will be required to have regard to the guidelines when assessing damages in a personal injuries action.”