Funding for Rehab to be increased by €2m a year 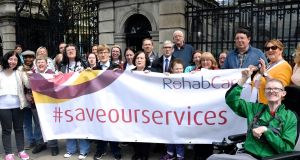 People with disabilities gather outside Leinster House on Tuesday ahead of final talks with the Minister for Health, Simon Harris, to save RehabCare. Photograph: Justin Farrelly

The Government has agreed to increase funding for the Rehab Group, which provides services for people with intellectual and physical disabilities, by €2 million per year.

It comes after warnings were issued by the group’s chief executive, Mo Flynn, that it faced closure if increased levels of funding were not approved.

This raised the prospect of the State being forced to find a way to provide services to the more than 3,000 adults and children who are Rehab Group service users.

Welcoming the news, Ms Flynn said it will “come as an enormous relief to the people in our services, their families, and our dedicated staff who have worked so hard to campaign for the continuation of their services”.

The agreement was reached following talks between the Rehab Group, its board of directors, Minister for Health Simon Harris and Minister of State with responsibility for disabilities Finian McGrath.

Speaking on Tuesday afternoon before the announcement, Ms Flynn criticised the State and its agencies for “ignoring” the difficulties facing the disability sector. “It’s time that people woke up and realised that if the disability sector isn’t here, there are going to be many thousands of people in this country who will be without services, and the State depends totally on the independent voluntary sector to deliver those services for them.”

She said the costs of compliance for the sector had risen since the introduction of the Health Information and Quality Authority, while levels of payment from the HSE for services the Rehab Group had taken over during the staff-hiring moratorium were too low. Meanwhile, insurance premiums for the sector were also on the rise, she said, with the organisation paying €700,000 a year this year for cover, compared to about €200,000 in 2016.

These combined pressures had left Rehab Group struggling to survive.

Service users and their families gathered outside the Dáil on Tuesday in advance of a meeting with TDs. Tommy Quille, who lives in his own apartment in Limerick with the support of Rehab Care staff, said the closure of services would have a massive impact on his life.

“I like living on my own. I would be very upset if anything should happen to RehabCare – it’s a vital service to me. Without it, I would probably end up in a nursing home, and I certainly don’t want that.”