Action against French warship company part of effort to recoup €1.4 million in grants 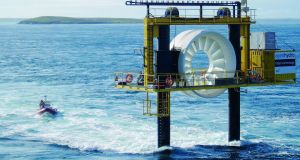 An OpenHydro turbine. At its peak, the tidal energy company had predicted €1 billion in revenue by 2026.

The court action, which was lodged on Monday, is understood to be part of an effort by IDA Ireland to recoup some €1.4 million in grants given to OpenHydro, which designed and built tidal and wave energy prototypes.

It is thought that IDA Ireland needed to lodge the court case action in order to recover some, or all, of the money from the company’s administrators.

The company went into examinership in 2018 and was then wound up after Deloitte insolvency specialist Ken Fennell concluded that there was no chance of it surviving under its €280 million debt load. Majority shareholder Naval Energies, the company which is being sued by IDA Ireland, ultimately ended up opposing the company’s examinership, arguing that it would continue to lose money the longer it was kept up and running.

The company founders, Brendan Gilmore and Donal O’Flynn, had been behind the effort to keep OpenHydro alive.

Naval Energies owned 71 per cent of the company, having paid in the region of €4 a share for the company in 2012, buying out then-major shareholder One51, which made a significant profit on its investment.

However, by 2017 the French company was announcing 50 job losses at the tidal energy firm, with the majority of the losses focused on its Dublin headquarters and at a technical facility in Greenore, Co Louth. The company employed 175 people at the time it shed the positions. It also had an office in France, and was building an assembly facility in Cherbourg.

At its peak, OpenHydro had predicted €1 billion in revenue by 2026. It hoped to be a global leader in its field, but suffered the same fate as many similar companies, which see technically feasible prototypes struggle to reach levels of operational efficiency which would make commercial production feasible. The company was still at a “pre-commercialisation” stage when it folded after 14 years in business.

The French state is the majority shareholder in the Naval Group, Naval Energies’ parent, which builds surface warships and submarines, as well as weapons systems and nuclear power systems. It had global revenues of €3.19 billion in 2016.

1 Coronavirus: No new Covid-19 deaths reported in State for first time since March
2 Coronavirus: What will reopen in Ireland’s phases to ease restrictions and what are the dates?
3 Tributes paid to Ireland’s deputy ambassador to China who died on Sunday
4 Unconvincing account may take some heat out of Dominic Cummings controversy
5 Archaeologists are ‘quite sure’ they have found Red Hugh O’Donnell’s burial place
Real news has value SUBSCRIBE