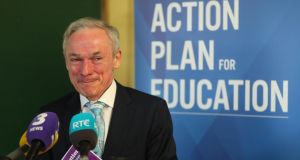 Minister for Education Richard Bruton said the issuing of profiles of achievement marked an an important moment in the reform of the junior cycle. Photograph: Niall Carson/PA Wire

Thousands of students who sat their Junior Cert earlier this year are set to receive the first ever State-recognised awards for extracurricular activities such as participation in science fairs or musicals.

Under reform of the junior cycle, the written summer exam is no longer the only formal recognition of a student’s accomplishments.

Instead, project work, short courses and classroom-based assessments are to be captured in a new “junior cycle profile of achievement”.

Other areas of learning will also be recognised, such as involvement in the BT Young Scientist exhibition, musical performances or membership of a student council.

Students who sat their Junior Cert earlier this summer will receive their awards over the coming days.

Minister for Education Richard Bruton presented the first of these new awards to students at his local school, Grange Community College, Co Dublin, on Tuesday.

Mr Bruton said one of the aims of the reform was to help ensure students are given the opportunity to develop a wider range of skills and recognition is given to students’ non-academic achievements.

The profile of achievement includes the student’s results in the State exam, classroom-based assessments, their participation in short courses and any other additional aspects of a student’s achievement such as extracurricular activities.

Specific recognition is given for students with special educational needs for their achievements in priority learning units.

This year, the awards include the achievements of students in English, the first subject to be examined under the junior-cycle reforms.

A new grading system is being introduced for junior-cycle subjects over the coming years as the new subjects are introduced.

This will replace the old Junior Cert A, B and C grades with descriptors ranging from “distinction” (90-100 per cent) to “partially achieved” (20-40 per cent).

Mr Bruton said the issuing of profiles of achievement marked an important moment in the reform of the junior cycle.

“The reforms put the student’s wellbeing and their individual potential at the heart of the learning process, ensuring a holistic education and recognition for non-academic achievements,” he said.

“I look forward to the continued roll-out of junior cycle [reform] and to students benefiting from this broader form of assessment.”

Under the junior-cycle reforms, students will need to complete two classroom-based assessments, a written assessment task and a final written examination for each subject.

Both the assessment task and the final written examination are marked by the State Examinations Commission.