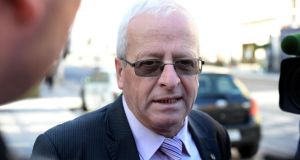 Independent TD Mattie McGrath has been strongly criticised for comments made about Fine Gael Senator Catherine Noone.

Mr McGrath was asked about the Oireachtas committee on the Eighth Amendment’s recommendations, which will be voted on today.

In response, Mr McGrath said it was not over “until the fat lady sings and I am not talking about the chairwoman”.

Mr McGrath has since contacted Ms Noone to apologise for the remarks, which have been widely criticised.

Ms Noone has said she will not respond to the comments and will not dignify them with a reply.

This is not the first time Mr McGrath have made negative comments about Ms Noone.

At a recent hearing of the Oireachtas committee on the Eighth Amendment, the Independent TD described Ms Noone as a “drama queen”.

Ms Noone on Wednesday said she would be very happy to get her work as chairwoman of the committee “off my desk”. She told RTÉ’s News at One it had been a very difficult process.

“It’s hard to be popular on this issue,” she said.

Ms Noone said it was difficult to predict how the committee would vote on the various modules. There are 48 proposals on a variety of issues, she said, such as women’s health and term limits.

“It is my sincere wish to have a majority report from the committee,” she added. However, it was “within the gift of any committee member” to publish their own minority report.

Preparing the heads of legislation on the matter was beyond the remit of the committee, Ms Noone said, adding that its report would be very useful to the Department of Health and members of the Oireachtas going forward.

The process is now two thirds of the way through, added the Fine Gael Senator. The first phase was the Citizens Assembly, the second was the committee.

“Ultimately it is up to the Irish people to see if the Amendment should be repealed.”