‘Youthquake’ is named as the word of the year 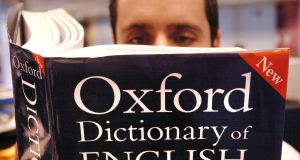 ‘Youthquake’ has been named as Oxford Dictionaries’ word of the year. File photograph: Ian Nicholson/PA Wire

“Youthquake” has been named as Oxford Dictionaries’ word of the year, following in the footsteps of previous winners “omnishambles”, “post-truth” and “selfie”.

The word — defined as “a significant cultural, political, or social change arising from the actions or influence of young people” — saw a fivefold increase in usage between 2016 and 2017, in part due to the UK’s general election and the reported increasing mobilisation of young voters.

The word itself is nearly 50-years-old — having been coined by then Vogue editor Diana Vreeland to describe how youth culture was changing fashion and music — but has seen a resurrection in a more political context over the past 12 months.

Casper Grathwohl, president of Oxford Dictionaries, said: “Youthquake may not seem like the most obvious choice for word of the year, and it’s true that it’s yet to land firmly on American soil, but strong evidence in the UK calls it out as a word on the move.

“We chose youthquake based on its evidence and linguistic interest. But most importantly for me, at a time when our language is reflecting our deepening unrest and exhausted nerves, it is a rare political word that sounds a hopeful note.

“Sometimes you pick a word as the word of the year because you recognise that it has arrived, but other times you pick one that is knocking at the door and you want to help usher it in.

“This past year calls for a word we can all rally behind.”

Youthquake was chosen from a shortlist that included “broflake”, a man who is readily upset or offended by progressive attitudes that conflict with his more conventional or conservative views, and “newsjacking”, defined as taking advantage of current events to promote a brand.

Also on the shortlist were “milkshake duck”, a “person or thing that initially inspires delight on social media but is soon revealed to have a distasteful or repugnant past”, and “white fragility”, defined as “discomfort and defensiveness on the part of a white person when confronted by information about racial inequality and injustice”.

Susie Dent, consultant to Oxford Dictionaries, said: “There’s not a lot of sunshine in the standout words this year.

“Words like Antifa and kompromat speak to fractured times of mistrust and frustration.

“In youthquake we find some hope in the power to change things, and had a little bit of linguistic fun along the way. It feels like the right note on which to end a difficult and divisive year.”