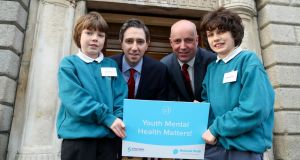 There is no need for a new national suicide authority, Minister of State for Mental Health Jim Daly has said.

Responding to a call by the parents of Milly Tuomey (11), a south Dublin girl who died by suicide last year, for such an authority, the Minister said one already existed. The National Office for Suicide Prevention (NOSP), which operates under the auspices of the HSE, was implementing a suicide reduction strategy, at local level.

“The ‘Connecting for Life’ strategy is being rolled out county-by-county and is operating now in about half the counties. It brings together the local authority, the HSE, the education and training board – all working together to reduce self-harm and suicide. The aim is to reduce suicide progressively between now and 2020, and ‘Connecting for Life’ will be established in all counties.”

Milly Tuomey took her own life on January 1st, 2016, weeks after posting a message on Instagram saying she was unhappy with her appearance and wanted to die, an inquest heard earlier this month.

Speaking on RTÉ The Late, Late Show on Friday, Milly’s mother Fiona said she and her husband Tim had not known the warning signs to watch for.

“I think that the main reason we wanted to come on and talk to people was to really get across the message that you don’t know,” said Mrs Tuomey.

She said people think of depression as “a big glaring sign across somebody’s forehead . . . a dark cloud, somebody crying, somebody shaking”, but that isn’t always the case.

“There were highs and there were lows. (Milly) could be withdrawn, she was irritable - I mean, it was a mix. But again, we’re coming from a position that unless somebody already has a diagnosed mental illness, you don’t know.

“You are not in a position to know the cues. You hear some of the warning signs and, of course, with 20-20 hindsight, fantastic, we might have been more aware of them, but unfortunately, we didn’t know the signs.”

Mrs Tuomey said had they been aware of SafeTALK, a training programme that prepares participants to identify people with thoughts of suicide and connect them to suicide first aid resources, they would have been better prepared to help Milly.

She called for for the establishment of a suicide prevention authority, with a similar function to the Road Safety Authority (RSA) with regard to road safety.

“We know how successful (the RSA) been in reducing road deaths and what a marvellous job they’ve done and we would like the same to happen for people so that we aren’t losing people of every age to suicide, but particularly young people,” she said.

Minister Daly said he had “no issue whatsoever” with the call made by Ms Tuomey, saying it was “very difficult for parents of children in mental distress”.

He said he would like to see dialectical behaviour therapy (DBT) workshops in more schools, saying these were available in some. DBT helps children and young adults to identify and cope with painful emotions, he said.

If you are affected by any of these issues, you can contact the Samaritans (116 123 or jo@samaritans.org)