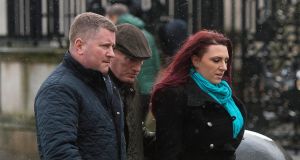 The two most senior figures in far-right group Britain First were both arrested at a court in Belfast today.

Deputy leader Jayda Fransen was detained for questioning over alleged anti-Islamic comments posted on the organisation’s Facebook page. Officers made the arrest immediately after she had signed bail on charges of making a hate speech at a rally in the city this summer.

Earlier, the group’s leader, Paul Golding, was held in connection with the same incident after he arrived with her at Belfast Magistrates’ Court. Police detained him as they approached ground floor elevators and took him for questioning.

During Fransen’s appearance in the dock, it was confirmed she is to contest the charges against her.

The 31-year-old faces two counts of behaviour intending or likely to stir up hatred or fear by using words which were “threatening, abusive or insulting”. The allegations relate to a speech made at a ‘Northern Ireland Against Terrorism’ rally at City Hall on August 6th.

Demonstrators had gathered on the same day as a republican march organised to mark the use of internment without trial by the British Army at the height of the Troubles in 1971.

Dressed in a dark coat and skirt, Fransen spoke in court to confirm she understood the charges.

Supporters in the public gallery

Up to 10 men and women gathered in the public gallery to support the Britain First deputy leader.

A detective constable said she could connect her to the alleged offences. Defence counsel Richard McConkey confirmed she will be fighting the allegations. “I can indicate there will be not guilty pleas to both charges,” he said.

The barrister added the evidence against his client relates to video footage. Fransen, who was at the centre of a political storm last month when US President Donald Trump retweeted anti-Muslim videos she posted, was bailed to return to court next month.

As part of those conditions she is banned from being within 500 metres of a public demonstration or rally. Police and prosecutors sought the restriction amid public order concerns. The detective claimed that a ‘Free Speech for Jayda’ rally was planned to take place in Belfast last weekend and was only postponed due to snow.

Fransen had been due to get a mid-afternoon flight back to London following her court appearance. But the court was told police wanted to speak to her about comments posted on social media earlier this week during her time in Northern Ireland.

She was allegedly involved in a video recorded outside Belfast’s Islamic Centre which referred to it as a “den of iniquity”. Detectives then made the arrest after Fransen completed her formalities. A small group of protestors voiced their objections in the court foyer and outside, with one man telling police: “It’s a disgrace what you’re doing.”