Ireland forced to play both sides in messy Brexit divorce

Increasingly, the Government will have to ride two horses in the Brexit negotiations 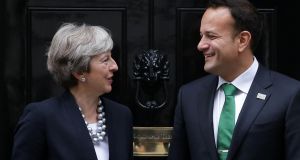 “At the moment everything is driven by the chaos in London.” Britain’s prime minister Theresa May and Taoiseach Leo Varadkar. Photograph: Daniel Leal-Olivas/AFP/Getty Images

Before every European summit, Taoiseach Leo Varadkar discusses the upcoming issues with his Cabinet and reports to the Dáil. A meeting of the cabinet committee on Brexit is also scheduled to take place next week.

But more crucial and decisive discussions take place with his chief lieutenants, Simon Coveney and Paschal Donohoe, with whom he thrashes out the big-picture politics of the Brexit issue in advance of the summits.

The three men now face complicated assessments about how best to advance Ireland’s interests as the prevailing currents shift and swirl in advance of the summit at the end of the month in Brussels.

While the heads of the 28 governments don’t meet until a week from Thursday, the coming week – when EU and UK negotiators meet in Brussels for another round of talks, and British prime minister Theresa May faces more parliamentary battles with Brexiteers and remainers alike – will be crucial.

As of now, uncertainty is the order of the day – what will be decided, what it means for the Brexit process and what it will mean for Ireland.

The Irish Government has blown hot and cold on the importance of the June summit in the Brexit process. Mr Varadkar and Mr Coveney spent a long time talking up the need for “substantial progress” on the Border issue to be made by June, suggesting that the entire future of the Brexit negotiations would be threatened by a failure on the part of the UK to present workable proposals on the Border backstop.

If the UK didn’t come up with workable commitments on the backstop, they warned, it would put the entire withdrawal agreement – due to be concluded by October – in doubt. Without such an agreement, the UK would simply crash out of the EU next march – the hardest of hard Brexits.

Nobody expects the talks to be suspended, but it will leave Ireland in an increasingly tricky position

Dublin had been piling on the pressure for months about the need for “substantial progress”. So when Theresa May last week proposed that special arrangements to keep Northern Ireland under customs union and single market rules could be extended to the rest of the UK – avoiding any barriers to Irish-British trade as well as between the Republic and the North – Dublin liked what it heard. Michel Barnier, however, did not. After a cautious welcome from Dublin, Mr Barnier made it clear that the plan would not fly with Brussels: it was cherrypicking, the EU’s term for taking benefits of the single market without its rules and obligations.

So where is the need for substantial progress now? Barnier’s firm rejection of the British proposals took Dublin aback, Ministers and senior officials admit privately.

The summit can’t reasonably conclude that much progress has been made. Nobody expects the talks to be suspended, but it will leave Ireland in an increasingly tricky position. The rationale for getting agreement on the backstop by June (or at least a signpost to how agreement would be reached) in Dublin was that Varadkar and Coveney wanted to avoid a situation where Irish issues were squeezed into last-minute negotiations.

Recently the former Taoiseach Bertie Ahern warned against exactly this scenario. He said that based on his past experience of EU summits, Ireland could be pressed by the EU, the French and the Germans to agree a last-minute, early-morning compromise at a critical deadline in October.

“That’s always how it works. I don’t think they should find themselves having a Halloween party at two o’clock in the morning,” Mr Ahern told a conference in Dublin.

But that is the prospect that now faces the Government. “Everyone wants to avoid the last-minute stuff. But let’s face it, this is the EU. That’s what happens,” says one Brussels source.

So in recent weeks, Varadkar has begun to play down the importance of the June summit, focusing instead on the October summit, which is the deadline for the full withdrawal agreement.

In the Dáil last week, the Fianna Fáil leader Micheál Martin accused Varadkar of performing a “reverse ferret” – first talking up the importance of the June summit and then playing it down.

Even Varadkar’s own Ministers wonder at the approach. “Jeez, is June important? Is it not? I’m not sure myself now,” says one Minister.

A senior official in Dublin, with magisterial understatement, admits “a certain inconsistency of late, all right”.

But the Taoiseach’s flip-flopping on the June summit reflects the generally uncertain state of the Brexit negotiations – and the continuing chaos in London. Indeed, Irish officials say there is a growing impatience with May in European capitals and a sense in some quarters that it will be impossible for the EU to conclude a deal with the present British government. They doubt that May has the political strength to do it.

Officials fiercely resist talk of a point of Irish inflection, where Dublin’s interests align with London’s

As this dynamic develops in the coming weeks, the Irish position – and the question of where Irish interests lie – will become less straightforward. How far can May be pushed? Should Ireland tone down its requirements for progress on the Border to keep the show on the road, or is it better – as one senior official suggests – to have a crisis sooner rather than later, in the hope that it would resolve the question of the Border? These judgments will be made in Brussels. But they will be made in Dublin, too.

Two themes have dominated the State’s approach to Brexit since the beginning: avoiding a hard border and negotiating as one of the EU 27. But now, as negotiations head for the decisive phase, there will be pressure for those two themes to diverge. To put it bluntly, Ireland might be happy to let the UK pick a few cherries to preserve its open borders and its trade with all of the UK. But the EU “has been very clear that this is not going to happen”, says one Brussels source.

To be clear: the Government is not switching sides. Officials fiercely resist talk of a point of Irish inflection, where Dublin’s interests align with London’s. They play down the differences between Dublin and the Commission on last week’s British proposals. And they say that the price of EU support for the State is Irish support for the EU.

“Look, we would be the first in the queue to bat for a close trading relationship between the UK and the EU,” says one senior figure in Dublin. “But the way to move the talks on to that subject is to firm up the backstop that they have already agreed to – not to try to wriggle out of it. But until the British are in a position to say what they want, and how they propose to get there, it’s hard to see any progress. At the moment everything is driven by the chaos in London.”