Candidates quizzed about the advantages and disadvantages of using convenience foods 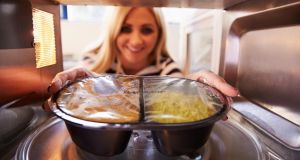 Junior Certs were quizzed about the advantages and the disadvantages of using ready meals. Photo: iStock

Candidates were quizzed about the advantages and the disadvantages of using convenience foods, while modern topics such as sustainability featured prominently.

“It was encouraging to see students being asked about topics which are very much part of their lives.”

In keeping with an emphasis on promoting higher-order thinking in exams, Ms Kent said required students to think rather than regurgitate what they have learned.

“Students were being asked to integrate their knowledge and apply a level of analysis to the questions on the paper based on what they’ve skills they learned during the past three years.”

While the paper overall was well-received and tested students’ abilities, she said the volume of written material required from the two-and-a-half hour exam was demanding .

“Students looked tired coming out - most were writing to the end. It required a lot of information.”

Section a, which required students to answer 20 questions, placed a heavy emphasis on sustainable home management.

For example, there were questions on how to conserve water in the home; different types of insulation that can be used to retain more heat; the advantages of buying an A-rated washing machine; and inorganic waste.

Ms Kent expressed concern that one question which asked students what precautions a consumer should take to ensure their bank account is secure was more suited to a business or technology paper.

Ms Kent said she felt a question which asked students to name two initiatives taken by the Government to discourage people from smoking were unfair,

She said initiatives such as smoking ban, for example, was introduced in 2004 - a time when most students were babies.

“An initiative suggest something recent, so that may have thrown them. In their eyes, there has always been a smoking ban,” she said.

Thursday’s exam accounted for just 50 per cent of marks. Students previously completed a cooking exam and a project, which accounted for the remainder of marks.

The ordinary level paper, meanwhile, was broadly well received with a wide range of questions.

However, Ms Kent raised concern that a high literacy level was required of students in some questions.

She said terms such as “perishable foods” and “redress” could have benefitted from explanation.

Try this at home: Junior Cert higher level home economics 5. (a) Outline the factors that should be considered when planning a child’s bedroom.

(b) Draw the floor plan of the child’s bedroom indicating the position of: the window/s; the door ; furniture; lighting; heat source.

(c) Suggest: a colour scheme; floor covering and types of storage for the bedroom and give a reason for your choice in each case.

(d) Explain the following design principles in relation to room planning: (i) proportion and (ii) rhythm.